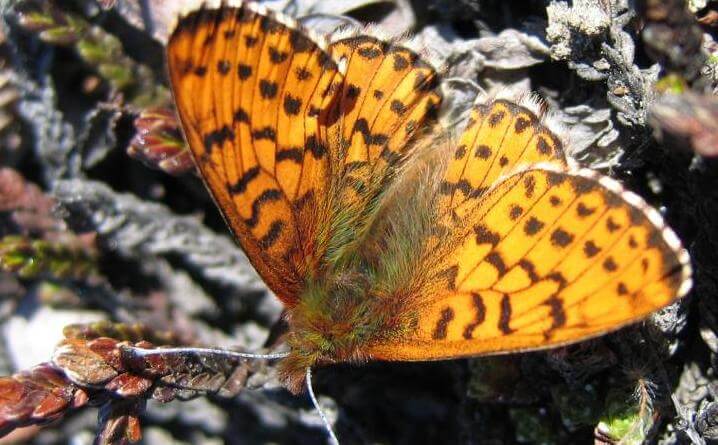 The Arctic fritillary is one of the two butterfly species that have become smaller due to climate change. Image: Toke T. Høye /Aarhus University

LONDON, 25 October, 2015 − Thanks to Arctic warming, Greenland’s butterflies are getting smaller – and that’s not good for them. And by 2100, spring will arrive three weeks earlier in 48 states of the US − which may not be a boon for migratory birds.

On the other hand, Sweden’s sand lizards are hatching earlier, and surviving for longer, as climate change once again delivers mixed blessings.

Species that have evolved and adapted slowly to one climate regime may not be so comfortable when circumstances change.

Scientists from Aarhus University in Denmark report in the Biology Letters journal that while at the Zackenburg Research Station in north-east Greenland, between 1996 and 2013, they measured the wing length of 4,500 butterflies from two species − the Arctic fritillary (Boloria chariclea) and the northern clouded yellow (Colias hecla).

They found that the length became significantly shorter in response to warmer summers – and the response was the same for both species, and for both sexes of each species.

In the UK, scientists have established that as the climate changes, in response to increasing carbon dioxide levels in the atmosphere, as a result of human combustion of fossil fuels, some butterfly species could disappear altogether, while others are likely to migrate.

In continental Europe, researchers have established that warmer summers tend to favour lighter-coloured butterflies and dragon flies, and in the Swiss Alps, mountain-dwelling butterflies have – along with the birds and flowers – begun to move uphill.

In the high Arctic, butterflies might have been expected to exploit the longer feeding season, and grow bigger. But the two species seem unable to take advantage of milder conditions.

“We humans use more energy when it is cold, because we must maintain a constant body temperature,” says the report’s lead author, Toke Høye, senior researcher at Aarhus Institute of Advanced Studies.

“But for butterfly larvae and other cold-blooded animals whose body temperature depends on the environment, the metabolism increases at higher temperatures because the biochemical processes are simply faster. Therefore, the larvae use more energy than they are able to gain from feeding.

“Our results indicate that this change is so significant that larval growth rate decreases. And when the larvae are smaller, the adult butterflies will also be smaller.”

The butterflies live so far north that they can’t move anywhere cooler. Because they are smaller, they may be less mobile and perhaps less fecund. And because the southernmost part of their range is warming fastest, the two species are being squeezed by climate change.

In contrast, Swedish sand lizards are likely to find that climate change works for them.

Gabriella Ljungström, doctoral student in the Department of Biological and Environmental Sciences at the University of Gothenburg, and colleagues report in the BMC Evolutionary Biology journal that they looked at the records of 350 females of the species Lacerta agilis.

They noted the effects of temperature on the egg-laying date over a 15 year period, and found that the lizards laid eggs earlier in warmer years.

Reptiles and amphibians almost everywhere are at risk, but Sweden’s resident lizards could actually benefit. The researchers think that earlier hatching could mean a better chance of survival

But in the 48 coterminous states of the US, shorter winters and the ever-earlier arrival of spring may create problems for some creatures.

Andrew Allstadt, ecologist at the University of Wisconsin Madison, and colleagues report in Environmental Research Letters that they projected increasingly early signs of spring – the first leaves, the first blooms and so on – to the end of the century, and found an advance of three weeks overall.

They also made estimates of the future rate of “false springs” −those that are followed by a sudden brief return of wintry frosts that can nip buds and destroy whole crops. In parts of the Mid-West and the western Great Plains, they found an increase.

In addition, they also considered the problem that some species take their seasonal cues not from daily temperature, but from daylight length.

“Our projections show that winter will be shorter, which sounds great for those of us in Wisconsin,” Dr Allstadt says. “But long distance migratory birds, for example, time their migration based on day length in their winter range..

“They may arrive in their breeding ground to find that the plant resources they require are already gone.” – Climate News Network