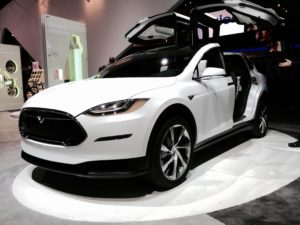 Some configurations of the Tesla’s new Model X SUV will be so heavy that they qualify for a George W. Bush-era tax deduction that gave small business owners US$25,000 to buy their very own Hummers.

The tax deduction applies to cars with a gross vehicle weight above 6,000 pounds that are used for business more than half the time. “Until now, the only cars that qualified were gas-powered behemoths like the Lincoln Navigator, Cadillac Escalade, Ford Expedition, and Chevy Tahoe,” the San Francisco Chronicle reports. “Although Teslas are more environmentally friendly than gas-guzzling SUVs, the tax break still raises hackles.”

The “super-loaded” version of the Tesla sells for US$132,000, Pender writes. Standard configurations start around US$75,000.

With all available deductions factored in, “a taxpayer who paid $125,000 for a Model X weighing more than 6,000 pounds in 2015 and used it strictly for business could deduct $45,000 the first year,” she adds. As a business owner, they can write off the rest of the cost of the vehicle within five years. “By comparison, a person who purchased a passenger car weighing less than 6,000 pounds used exclusively for business could deduct a maximum of $3,160 the first year, no matter how much it cost.”

In other Tesla news, LearnBonds reported Saturday that Wall Street was concerned about the release date for the Model X, two weeks after the vehicle’s official launch. “As we wait for the first real unit of the car to be released, more than two weeks after the big launch, hard questions still need to be asked,” writes correspondent Paul Shea. The six cars released at the launch went to Tesla friends and founders, but other customers with “top reservations” are still waiting.

“We know the firm hit its stated release date with those six shipments,” Shea notes. “In pure business terms, however, the influx of sales that Wall Street was expecting for the Model X on launch and shipment just isn’t happening.” (h/t to CleanTechnica for first pointing us to this story)