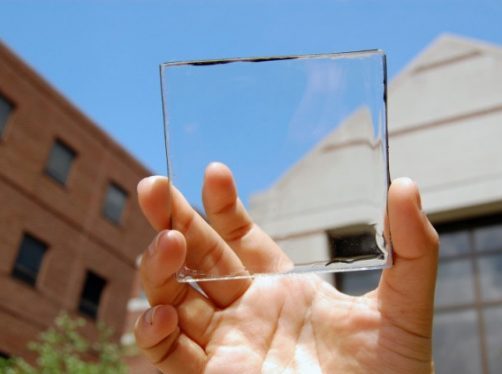 A research team at Michigan State University has developed a fully transparent solar concentrator that could turn any sheet of glass—from a window to a smart phone screen—into a photovoltaic cell.

“Unlike other ‘transparent’ solar cells that we’ve reported on in the past, this one really is transparent,” reports OffGridQuest.com. The technology is suitable for a range of settings, including “tall buildings with lots of windows or any kind of mobile device that demands high aesthetic quality like a phone or e-reader,” said research team leader Richard Lunt.

“Scientifically, a transparent solar panel is something of an oxymoron,” OffGridQuest explains. Photovoltaic cells produce energy by absorbing sunlight and converting it to electricity. “If a material is transparent, however, by definition it means that all of the light passes through the medium to strike the back of your eye. This is why previous transparent solar cells have actually only been partially transparent—and, to add insult to injury, they usually cast a colourful shadow, too.”

The Michigan State team uses a formulation in which “if you look closely, you can see a couple of black strips along the edges of plastic block. Otherwise, though, the active organic material—and thus the bulk of the solar panel—is highly transparent.” The current cell operates at a hardly-scintillating 1% efficiency, and the researchers predict future performance of 5%.

“On their own these aren’t huge figures, but on a larger scale—every window in a house or office block—the numbers quickly add up,” the article states. “Likewise, while we’re probably not talking about a technology that can keep your smartphone or tablet running indefinitely, replacing your device’s display with a TLSC could net you a few more minutes or hours of usage on a single battery charge.”