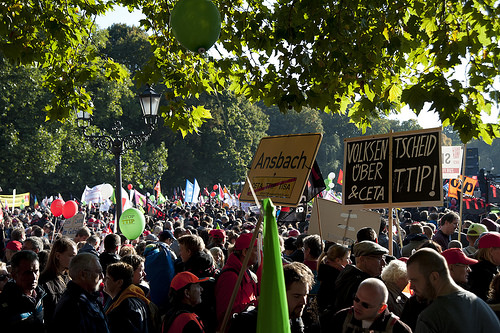 The global agreement that emerges from the UN climate summit in Paris this year would be protected from investor-state dispute settlement (ISDS) challenges under a resolution adopted by the European Parliament.

Earlier this year, Osgoode Hall law professor Gus Van Harten published a paper arguing for an “ISDS carve-out” to prevent countries from facing massive trade settlements from companies that believe they’ve been disadvantaged by measures to reduce greenhouse gas emissions. A similar carve-out for tobacco under the Trans-Pacific Partnership was declared a major, hard-fought victory for public health.

“There is a problem that needs to be addressed if any agreement or treaty reached at the Paris summit is to be realized in the home countries of the parties,” wrote Council of Canadians Chairperson Maude Barlow in a companion piece to Van Harten’s paper.

“The central problem is that many of the same countries pledging to take serious action on climate change are also party to, or are aggressively negotiating, trade and investment deals that contain a mechanism that gives large corporations the right to challenge any changes to the current rules under which they operate.”