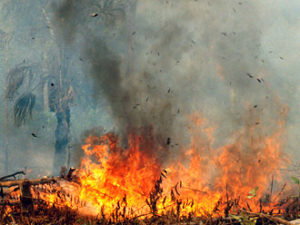 Peat fires in Indonesia, brought about by an intensifying drought related to El Niño, have caused US$14 billion in damage so far and could have an impact on the global atmosphere.

“This year, the very smoky peat burning has been simply massive,” the Washington Post reports. “The 2015 Indonesian fire season has so far featured a stunning 94,192 fires. That’s more Indonesian fires than at the same time in 2006, a banner year both for fires and also for their carbon emissions to the atmosphere.”

In late September, when haze-shrouded Singapore closed schools and handed out face masks in response to the Indonesian fires, the International Business Times attributed the fires to “slash-and-burn agriculture [that] involves wiping out large areas of land for palm oil and rubber plantations.”

IBT said parts of Singapore and Malaysia had been covered in smoke for weeks. “Exercising outside is simply not an option right now. When I open the balcony door, you can immediately smell it. I can feel it in my throat,” said teacher Iain Craig. “All my school football team matches have been cancelled over the last week. Kids are brought inside at lunchtime, too.”

Citing Weather Undergound’s Jeff Masters, the Post says millions of people have been affected, 120,000 have sought medical attention for respiratory problems, and total emissions of 995 megatonnes as of October 14 “are more than large enough to have global consequences.”

Allowing for “substantial uncertainties” in the calculation, “fire emissions are already higher than Germany’s total CO2 emissions, and the fire season is not over yet,” said VU University Amsterdam researcher Guido van der Werf. Indonesian fire emissions hit 1.5 GT in 2006 and exceeded 4.0 GT in 1997.

And in a peat fire, compared to a forest wildfire, there is no offsetting reduction when new growth sucks carbon out of the atmosphere. “In Indonesia, what’s burning is for the large part peat layers that have been deposited over thousands of years,” van der Werf said. “So this is really a net source of emissions just like fossil fuels are.”

IBT cites a Facebook post by Singapore Foreign Affairs and Law Minister K. Shanmugam that questioned Indonesia’s commitment to fight the fires. “The Indonesian government has said it is taking steps to deal with the problem. We hope those steps will lead to lasting outcomes, and we are prepared to work with Indonesia on this,” he wrote. “Yet at the same time, we are hearing some shocking statements made, at senior levels, from Indonesia, with a complete disregard for our people, and their own.”

Last week, Indonesia committed to a 29% emissions reduction by 2030 compared to a business-as-usual scenario, but the World Resources Institute pointed out the country “could also boost its mitigation potential from the land use and energy sectors.”