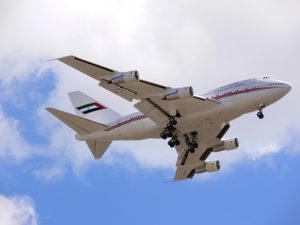 Airline fuel consumption in the United States is growing at its fastest rate since 2011, according to federal government data.

The U.S. Department of Transportation calculated that carriers consumed 1.6 billion gallons of fuel in July, up 3.4% from the same month a year earlier and nearly 2.9% for the first seven months of the year, Reuters reports. The U.S. Energy Information Administration—which covers foreign carriers that refuel at U.S. airports, as well as domestic airlines—placed the increase between 4.7% and 6.6% between January and June.

“Airlines’ fuel use has been on a downtrend since the turn of the century as carriers introduced newer aircraft and sought operational efficiencies by cutting excess weight and flying fewer but fuller and larger planes,” Reuters reports. “But the main drivers of aviation demand (economic growth, employment, and household incomes) are all now supporting strong growth in passenger numbers. At the same time, falling fuel prices have translated into lower fares, giving an extra boost to the upturn in demand.”

Seasonally-adjusted fares are down 13% from their peak in June 2014.