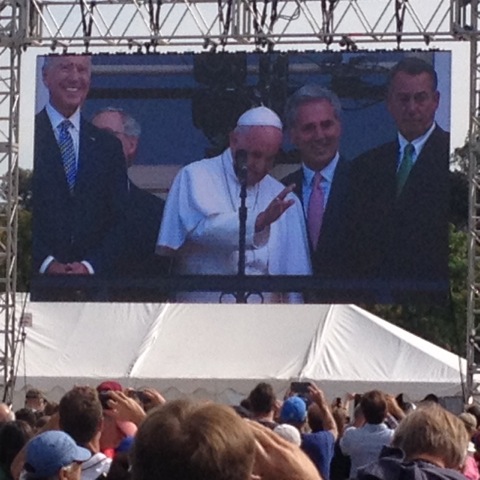 Just one day after Pope Francis focused largely on climate change in his historic address to the United States Congress, U.S. President Barack Obama and Chinese Premier Xi Jinping are set to unveil a joint vision for a global climate agreement during Xi’s visit to the White House around mid-day today.

“China will start a national pollution-trading system to cut global warming emissions and make a substantial financial commitment to help poorer countries move away from fossil fuels,” iPolitics reports this morning, citing two U.S. officials speaking on a conference call Thursday. “In a joint announcement with the U.S., China also will outline changes intended to favour electricity produced domestically by sources that will pollute less.”

The two leaders “are using the announcement as a way to prod talks on a global agreement to stem climate change,” Nussbaum writes. China’s commitments are expected to include an expanded emissions trading system, opening in 2017 and including key emitting sectors like power generation, iron, steel, and cement.

In his speech to Congress Thursday morning, the pope “saved his most specific prescription for combatting climate change, a cause on which he said the United States has a special obligation to lead,” the Washington Post reports.

“I call for a courageous and responsible effort to redirect our steps, and to avert the most serious effects of the environmental deterioration caused by human activity,” Francis said. “I am convinced that we can make a difference—I’m sure. And I have no doubt that the United States—and this Congress—have an important role to play. Now is the time for courageous actions and strategies.”

The pope also addressed climate change in remarks at the White House on Wednesday, reports HuffPost Politics. “Accepting the urgency,” he said, “it seems clear to me also that climate change is a problem which can no longer be left to a future generation.”

Coverage on ThinkProgress focused on the hundreds who gathered on the National Mall in Washington, DC to rally for climate justice. Lise Van Susteren of Moral Action on Climate Justice called climate change “as global an issue as you’ll ever want to encounter.

“If you’re concerned about immigration, then you realize climate change creates so many climate refugees. If you’re a person who is interested in protecting animals, then you realize that if we didn’t eat animals, we’d be reducing our carbon emissions by almost as much as the entire transportation sector,” she told TP correspondent Natasha Geiling.

“Each group recognizes that we have so much common ground, and that if we put our energies together, we can see some real differences.”