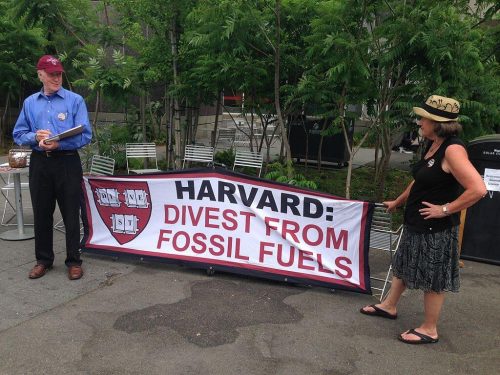 As momentum builds for a new deal on climate change, investors are becoming increasingly nervous about having their cash in fossil fuels.

LONDON, 24 September, 2015 – A worldwide movement aimed at encouraging institutions and individuals to turn their backs on fossil fuel investment and so head off serious climate change is on a roll.

Altogether more than 430 investment firms and companies, and over 2,000 individuals, have so far pledged to withdraw investments from fossil fuels. That adds up to US$2.6 trillion in assets, says a report by Arabella Advisors, a US group which helps foundations and wealthy individuals make investment decisions.

The report says that a growing realisation of the risks involved in fossil fuel investments has created a surge in divestment activity over the past 12 months. A similar report produced by Arabella in September 2014 estimated that divestments from fossil fuels then stood at around $50 billion.

The latest report, based on data collected from investment firms and individuals around the world, says growing numbers of pension funds, local governments, religious groups and private companies are pulling their cash out of the fossil fuel sector.

Those who have recently pledged to withdraw all or part of their investments in fossil fuels include the California Public Employees’ Retirement System, the Norway Pension Fund, the Canadian Medical Association and the World Council of Churches.

At the same time, says the report, investments in renewable energies are increasing – with clean energy investments around the world reaching $310bn last year.

“The Arabella report shows that more and more investors are reducing their carbon risk today and diversifying their portfolios with the goal to harness the upside in the sustainable clean growth industries of the future”, says Thomas Van Dyck of the SRI Wealth Management Group.

“That underscores what I see every day as a financial advisor – that demand for fossil-free investment products is increasing.”

Christiana Figueres, the executive secretary of the UN Framework Convention on Climate Change, has been among those pushing for a shift in investments from fossil fuels to clean energies.

“Investing at scale in clean, efficient power offers one of the clearest no-regret choices ever presented to human progress”, said Figueres via video link at the New York launch of the Arabella report.

Various funds, foundations and individuals have adopted differing approaches to withdrawing their cash from fossil fuels. Some have divested entirely, while others are divesting from the worst polluters – and the greatest threat to the climate – such as coal companies and those involved in oil produced from tar sands.

Leonardo DiCaprio, the actor, who heads an environmental foundation, is among those who announced that they were withdrawing fossil fuel investments.

“Climate change is severely impacting the health of our planet and all of its inhabitants, and we must transition to a clean energy economy that does not rely on fossil fuels, the main driver of this global problem”, said DiCaprio.

“Now is the time to divest and invest to let our world leaders know that we, as individuals and institutions, are taking action to address climate change, and we expect them to do their part this December in Paris at the UN climate talks.”

Analysts caution that, while there are signs that investors are becoming increasingly wary about putting their cash into fossil fuels, the industry is powerful and is not about to fade away.

A recent report by the Organisation for Economic Co-operation and Development points out that governments around the world are still providing between $160bn and $200bn of support each year for the production and consumption of fossil fuels. – Climate News Network