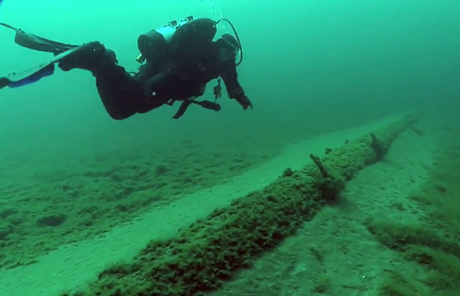 Enbridge’s Line 5 pipeline beneath Michigan’s Mackinac straits has become a flashpoint for public concern, evoking harsh memories of another pipeline that leaked more than 800,000 gallons of diluted bitumen into the Kalamazoo River.

“The company readily admits there’s a concerted effort under way to repair its image—an uphill battle after the infamous Kalamazoo River disaster in 2010 left many Michiganders with skeptical, suspicious, or downright hostile views of the pipeline giant,” MLive reports. The company has been meeting with chambers of commerce and local residents, buying radio, TV, and newspaper advertising, and promising “public dialogue and ‘sustained focus and extreme care’ to ensure that the controversial oil pipeline, built in 1953, never leaks,” Ellison writes.

“The public relations blitz is not surprising after Enbridge has spent the last few years taking it on the chin from Michigan environmentalists, who need only to bring up the ‘Keystone Kops’ bungling that caused the Kalamazoo River disaster and the senior citizen status of Line 5 to furrow most people’s brow in concern.”

Ellison reviews a cluster of public, legal, and regulatory obstacles Enbridge has faced in the last year, noting that BP’s Deepwater Horizon disaster and the Refugio oil spill in California in May that have brought a “paradigm shift” in public attention to energy infrastructure, according to Enbridge Community Relations Manager Jason Manshum.

“Enbridge hasn’t exactly abated those fears with transparency,” MLive notes. “The year-long Michigan task joint force inquiry conducted by the attorney general and the Department of Environmental Quality was stymied in trying to access detailed Line 5 inspection data though a federal government portal that sources say only allowed the state to view raw data, not print or save it.”

Enbridge now plans to summarize the data online in usable form, but critics say they won’t buy the company’s safety assurances until they can assess the material for themselves.

“In data we trust and they have not provided the kind of data that would convince me at all they don’t have something to hide,” said Line 5 critic Ed Tim, a retired Dow Chemical engineer. “Their position could be true, but how can we trust or believe them?” Fossil companies always say their infrastructure is safe, he adds, “but pipelines keep blowing up.” (h/t to Midwest Energy News for pointing us to this story)