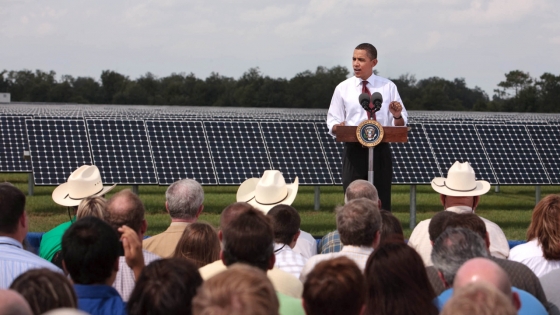 The Obama administration announced US$120 million in new funding last week to support clean energy technology development for “homes, businesses, and other facilities” in 24 states, The Hill reports.

“We want to give every American a choice, an energy choice on what they want to use, no matter who they are or where they live,” Biden told the Solar Power International conference. “This isn’t a government mandate; it’s the market working.”

In her coverage of Biden’s speech, Greentech Media’s Julia Pyper notes that U.S. rooftop solar installations have grown from 66,000 to 734,000 since Obama and Biden took office in 2008. Meanwhile, Biden said, “some of the most deep-pocketed special interests that have lobbied for years for fossil fuels have announced, ‘Let’s stop it, let’s take away consumer choice, let’s stifle the market. Isn’t it amazing?”

The new White House program includes US$50 million to boost photovoltaic cell efficiency and speed up commercialization, CleanTechnica reports. “The aim is to push solar energy far beyond the Energy Department’s original SunShot goal of competitiveness with fossil fuels, and beat them on cost in many more markets,” writes correspondent Tina Casey.

The new funding was announced “along with a new Energy Department energy efficiency roadmap that aims to double—yes, double—energy efficiency in the U.S. by 2030 through standards for utilities, vehicles, and consumer goods,” she adds. Casey’s coverage includes a roundup of many of the specific projects that will receive grants.