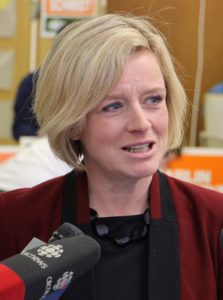 Under intense pressure from falling oil prices and the resulting economic slowdown, Alberta Premier Rachel Notley says her government will seek a middle ground between significant greenhouse gas controls and the unbridled development to which the fossil industry became accustomed with past provincial administrations.

“We’re going to work to bend the curve,” Notley told the Globe and Mail last week. “It may not be as fast as you’re seeing in other jurisdictions, but it will be in the right direction, and you’ll see that we’re making that progress and we will stop going in the wrong direction.”

The premier “warned that her climate-change initiatives are almost certain to disappoint environmentalists, who will insist they do not go far enough, while simultaneously angering industry, which will assuredly insist the measures are too aggressive and amount to ill-timed job killers,” Mason writes.

“In my view, this means we’ve probably struck the right balance,” Notley said in the interview.

Notley’s pre-budget comments were published just a day before Corporate Knights publisher Toby Heaps pointed to Alberta’s fiscal crisis as a unique opportunity for the province to reinvent itself.

“Rip-and-ship seemed like a great model while it worked, but it also surrendered a lot of power to other market participants,” Heaps writes. “Scotiabank estimates Alberta producers have given away $10 billion a year in oil discounts for each of the past two years, because they had no option but to sell to price-making U.S. refiners. To put this number in perspective, that’s about 10 times more than a British Columbia-style carbon tax would generate from the oil patch.”

Heaps urges the province increase its carbon tax to match B.C.’s at $30 per tonne, devoting some of the funds to a carbon dividend and the rest to finance “moonshot” technologies that would improve operating efficiency and reduce emissions in the tar sands/oil sands. “In combination with the coal phase-out, this would substantially boost Alberta’s climate bona fides while being sensitive to the oil patch’s current economic situation.”

At the same time, he says Alberta should take advantage of its AAA credit rating and low interest rates to invest in badly-needed infrastructure. “Such a stimulus would do well to focus on four areas: transit, power, energy efficiency, and infrastructure to support an eco-industrial cluster in the Greater Edmonton region designed to fully tap the value of Athabasca’s hydrocarbons.”