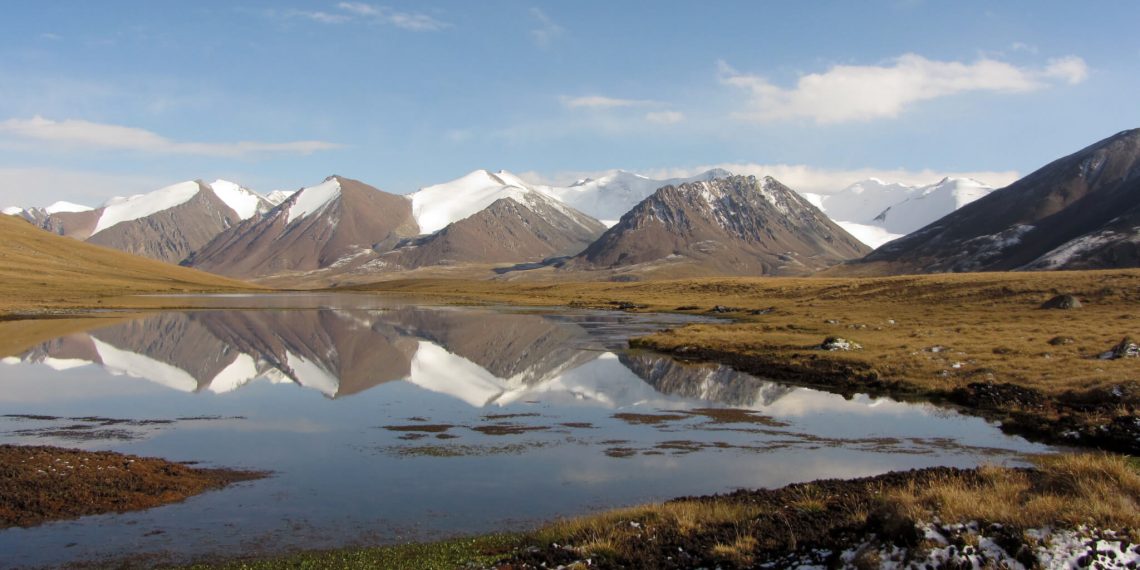 These glaciers in the Teskey Ala-Too

The speed at which the warming climate is melting glaciers in Central Asia may ruin the water supply of millions of people within 50 years.

LONDON, 22 August, 2015 – Glaciers in the largest mountain range in Central Asia, the Tien Shan, have lost over a quarter of their mass in the last 50 years, and nearly a fifth of their area.

An international team of researchers estimates that since the 1960s the glaciers have shrunk by almost 3,000 square kilometres, losing an average of 60 sq km of ice annually.

The Tien Shan reach almost 7,500 metres (24,500 feet) in height, and are a vital reservoir for the countries through which they pass – China, Kazakhstan, Kyrgyzstan and Uzbekistan.

The team, from the GFZ German Research Centre for Geosciences and France’s National Centre for Scientific Research (CNRS), report in the current online issue of Nature Geoscience that about half of the mountains’ glacier volume could be depleted by the 2050s.

The researchers say the Tien Shan (which in Chinese means “the celestial mountains”) have lost 27% of their mass and 18% of their area since 1960.

Glaciers worldwide are melting at unprecedented rates, which is serious because they are often irreplaceable sources of drinking water, hydropower and irrigation. The Tien Shan are no different.

The mountains form a vital part of Central Asia’s water cycle. Snow and glacier melt from the Tien Shan is essential for the water supply of the four countries they traverse.

“Despite this importance, only a little was known about how glaciers in this region changed over the last century,” says the principal investigator, Daniel Farinotti. Most of the direct monitoring programmes, which were closed with the end of the Soviet Union, have been resumed only recently.

Farinotti, from GFZ, and his colleagues have completed a reconstruction of the glaciers’ evolution in the Tien Shan. “We combined various methods based on satellite gravimetry, laser altimetry and glaciological modelling”, he says.

This let them plot the evolution of every single glacier. They came up with some surprising findings: currently, the range is losing ice at a pace that equals roughly double the annual water consumption of the whole of Germany.

Glaciers can store water as ice for decades, transferring winter snow and rainfall to the summer months by releasing it as meltwater. This is particularly important in seasonally arid regions which have months with virtually no precipitation. Their local water supply depends on meltwater availability, as Central Asia knows from experience.

Many people in Central Asia depend on water seasonally impounded by the glaciers of the Tien Shan, not only for water itself but for hydro-electricity and for food.

The pace of glacier retreat in the Tien Shan accelerated noticeably in the decade from the 1970s. Daniel Farinotti says: “The long-term signal is clearly related to the overall rise in temperature”. The study shows that the rise in temperature, and summer temperature in particular, is a primary influence on the region’s glaciers.

“Since the winter months in Central Asia are very dry and the mountains are that high, glaciers receive most of their snowfall during the summer”, Farinotti explains. “This means that an increased temperature contributes to both increased melt and reduced glacier nourishment – and obviously, both contribute to glacier wastage.”

Using the latest climate projections, which expect an additional 2°C of warming in summer temperatures between 2021 and 2050, the authors suggest what the mountains’ future evolution may look like. Half of the total glacier ice volume of the Tien Shan today could be lost by the 2050s, they believe. – Climate News Network

Too warm, too few fish: Health warning for world’s oceans