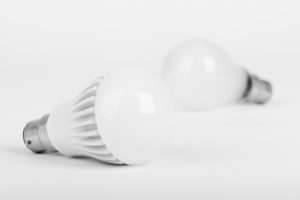 Light-emitting diode (LED) lights are as serious a challenge to traditional power utilities as residential solar and net metering, energy and environment analyst Dennis Wamsted writes on The Energy Collective.

Wamsted’s musings on LEDs began when he changed out the incandescent bulbs in a bathroom light fixture in his home. The replacement cut electricity consumption in that part of his home from 260 to 66 watts (while delivering better light). A back-of-the-envelope calculation revealed that the previous six bulbs accounted for 1.5 to 2% of the home’s electricity demand.

“Monetarily, it’s a tiny loss for Dominion (my local utility),” Wamsted writes. “But here’s the rub, and it’s exactly the same criticism levelled by the utility industry against net metered residential solar customers: I am now no longer buying those 17.5 kwh a month—and the small amount of fixed system charges that I had previously been paying for through that consumption I am now essentially shifting to other users.”

Which means that the more energy users save, the more serious the imbalance becomes.

“The problem for Dominion and other utilities is that thousands of consumers are doing exactly what I just did, and many thousands (if not millions) are expected to do the same thing in the years to come,” Wamsted adds. “Clearly, new rate structures that don’t rely on recovering fixed system charges through monthly sales are needed. Because criticizing ratepayers (oh, that’s right, utilities like to call us customers now) for investing their own funds to cut their electricity consumption is a losing proposition for the utility industry.”