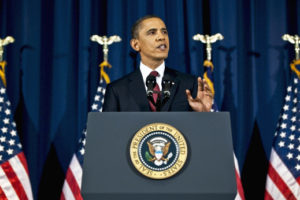 The Alberta government is confirming that it won’t lobby for approval of the Keystone XL pipeline, preferring to devote its effort to projects it considers more likely to be built.

“It’s in their hands,” said Energy Minister Marg McCuaig-Boyd, following persistent rumours that President Obama is poised to reject Keystone. After Sen. John Hoeven (R-ND) brought that Beltway chatter to light by repeating it on the Senate floor, White House deputy press secretary Eric Schultz confirmed the Keystone decision will be made before the end of Obama’s second term of office.

McCuaig-Boyd confirmed Premier Rachel Notley’s statement during the provincial election that she would not travel to Washington to lobby for Keystone. “We’re going with the ones that are probably going to have the most success soonest,” McCuaig-Boyd told CBC. “Energy East has some promise and so does Kinder Morgan’s Trans Mountain. Those are the two right now to put our energies into.”

With Keystone delayed and now likely to be scuttled, CBC and Bloomberg both reported this week on the various alternate routes the Alberta fossil fuel industry has developed to get its product to market. “Those efforts appear to be working,” CBC’s Johnson writes. “The amount of crude exported from Canada to the Gulf Coast nearly doubled from April 2014 to April 2015, according to data from the U.S. Energy Information Administration.”