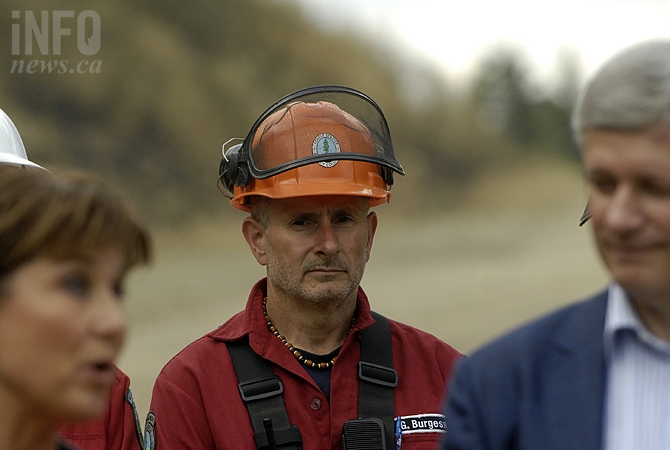 Reporters were promised an opportunity to question the two politicians, “but B.C. Premier and local MLA Christy Clark answered only two, while the Prime Minister declined to answer all but one question. He made various statements about firefighting efforts, including a possible discussion sometime in the future about sharing in firefighting efforts.”

Proskiw notes that “provinces fund their own firefighting. It’s not a federal responsibility.” But “a federal election is less than three months away.”

On The Huffington Post, Infonews.ca editor Marshall Jones explained the decision to run the story with a photo that focused on a firefighter, not the politicians. The Prime Minister “chose to make a campaign statement about possibly sharing firefighting costs, but no date, no commitment to put him on the record. We thought the focus should be on the firefighters. Adam had a number of photos of them—they looked exhausted. We wrote what we saw as the only story we had from the event,” he wrote in an email.

“We thought it was entirely appropriate for what happened and we are a little surprised other media didn’t treat it similarly,” Jones continued. “We are accused in our comments and elsewhere of being political, but our motivation was quite the opposite. The photo op smelled like electioneering and we didn’t want to play any part in that.” The paper also skipped B.C. Premier Clark’s “media show” the day before, even though she’s the local MLA, because “we thought she could thank them without the photo op. These are not unusual decisions for us.”