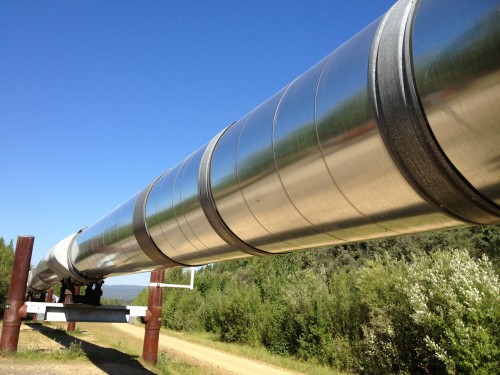 Nexen Energy’s five-million-litre pipeline spill southeast of Fort McMurray may have begun as far back as June 29, more than weeks before a contractor discovered it while passing by the site, the company disclosed Wednesday.

“It’s shocking to learn that the pipeline may have been spilling for two weeks before it was discovered—and even then, only by accident,” said Greenpeace Canada climate and energy campaigner Mike Hudema. “Warning bells should be going off for Canada’s premiers right now about the dangers they are bringing to their communities if new pipelines are built. Because that’s what they’re calling for with the Canadian Energy Strategy.”

Following a tour Wednesday organized by Nexen, CTV News described a spill that “left 16,000 square metres of muskeg slathered in bitumen, sand, and produced water. The site has been fenced off as cleanup efforts continue, and plastic eagles have been set up to deter wildlife from the area.”

“It’s disheartening to see the site and it’s disappointing that this has happened,” said Nexen CEO Fang Zhi. “”Our focus as of now is ensuring the safety of our workers on the site, minimizing whatever impact on the environment and on the wildlife, as well as understanding the root causes of this incident through investigations.”

Ron Bailey, senior vice-president of Nexen’s Canadian operations, said it will be months before the company can pinpoint the cause of the leak.

In an email appeal Thursday, Toronto-based Environmental Defence connected the Nexen spill to the proposed Energy East pipeline. “Nexen, the owner of the one-year-old pipeline that burst, had installed a state-of-the-art leak detection system plus double walls, and boasted about how the new technology would help them protect the environment,” wrote Climate Program Manager Adam Scott.

“Does this sound familiar to you? It might, because TransCanada has been bragging that its proposed Energy East pipeline will also be the height of pipeline safety. But clearly, state-of-the-art in pipeline safety isn’t safe enough.”