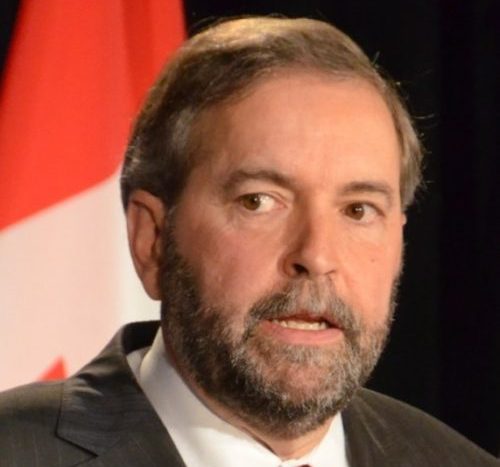 “[Prime Minister Stephen] Harper doesn’t believe in the science of climate change, so he’s not doing anything,” he said. And to justify that position, Harper and his environment minister, Leona Aglukkaq, repeatedly stress that Canada’s greenhouse gas emissions only represent a small percentage of the global total.

“Whenever we’ve taken on these big fights internationally, we were always one of the smaller players, but it didn’t mean that we didn’t go in,” Mulcair told CHCH Morning Live in Hamilton, Ontario. “In the Second World War, the same argument could have been made. ‘Oh, we only represent a couple of per cent of the forces.’ But we knew we had a job to do. This is a battle the world has to take on. Climate change is real. Reducing greenhouse gases has to be made a priority. It can be done.”

A day later, in a pre-election stop in Amherstberg, Ontario, Mulcair proposed an Innovation Tax Credit to attract investment and restore jobs in Canada’s manufacturing heartland. “Part of Mulcair’s industrial plan includes developing and subsidizing renewable energy, a sector in which Ontario is already leading the way, through the building and export of solar panels and the upcoming implementation of a carbon cap and trade system that targets polluters,” the National Observer reported.

Mulcair “has repeatedly talked about the need for Canada to become a leader in clean technology,” spokesperson George Smith told the Observer.