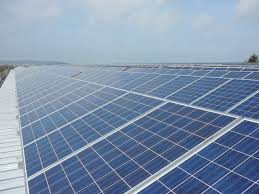 SunEdison announced a US$2.2 billion deal this week to acquire Vivint Solar, the second-biggest installer of residential solar in the United States, in a development that underscored the large scale and high stakes in the U.S. solar industry.

“With Vivint Solar, we’re tripling our value,” CEO Ahmad Chatila said, during an investors’ call, adding that renewable energy is already growing at the same pace as fossil fuels. Industry-wide, “we’re adding a large oil company in value each year,” he noted. “A lot of people don’t realize that.”

“We are building the next generation of the biggest energy companies on earth,” Chief Strategy Officer Julie Blunden told Greentech. “We’re not waiting to find out who they’ll be. We want it to be us.”

The Vivint acquisition brought SunEdison 523 megawatts of rooftop solar projects that will generate US$630 million in revenue through 2019 for investors in TerraForm, SunEdison’s YieldCo.

And that wasn’t the beginning or the end of SunEdison’s buying spree, CleanTechnica reported late last night. The day after the Vivint deal, “SunEdison announced it would be acquiring Mark Group, a British-based leading full-service energy solutions provider, and an existing SunEdison solar sales and installation partner. This acquisition opens up a direct line of sale into the UK residential and commercial solar business,” with access to about two million customers, writes correspondent Joshua S. Hill.

With plans to build more than a gigawatt of new renewable electricity per quarter, “SunEdison’s top executives are framing the [Vivint] deal as part of an aggressive strategy to rival the world’s top energy players, including oil majors and utilities,” Greentech reports. SunEdison “has struggled to find its place in the residential PV sector,” but the Vivint acquisition gives it “the best door-to-door solar sales team in the country and one of the largest residential pipelines, behind SolarCity and Sunrun.”