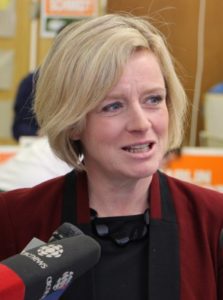 Alberta Premier Rachel Notley sang the praises of her province’s tar sands/oil sands industry and promised a stable political environment for investment and exports in a July 7 talk to the Stampede Investment Forum, co-hosted by the provincial government, Calgary Economic Development, and the Canadian Association of Petroleum Producers.

“For more than half a century, Albertans have been coming up with unconventional solutions for an unconventional resource so we can extract, handle and ship it responsibly, to the very best of our abilities,” she told a private audience of 24 international investors from 14 countries, 120 oil and gas executives, and eight of her 11 Cabinet ministers.

“It’s a tremendous asset which has transformed Alberta into one of the world’s leading oil producers. And I’m here today to emphasize that the province has a government determined to defend this advantage, by being constructive at home, and by building relationships around the world.”

Notley acknowledged the uncertainty (not to say panic) that followed the election of an NDP provincial government May 5. “We are working hard to make the transition as smooth as possible, and bring as much economic stability as we can, while we implement our plans,” she said. “Those plans centre on living up to our promise to grow prosperity and create good jobs and conditions that benefit every Albertan. We know there is only one way to succeed. And that’s by supporting a free, open, sustainable, and increasingly diversified economy,” and by being “honest, thoughtful partners” to job creators in the private sector.

“Expanding existing oil sands projects, establishing new ones, and pioneering advanced technologies—all this requires spending on a large scale,” she asserted. “We will maintain a warm welcome for investors and uphold their right to earn fair returns.”

In the Calgary Herald, conservative columnist Don Braid commented that Notley “didn’t just extend an olive branch to oil and gas leaders and investors on Tuesday. She brought the whole tree and shook it, raining down petals of praise and friendship.” The premier “delivered a flat-out endorsement of continued investment and expansion of the oilsands,” Braid said, prompting “widespread delight” from the audience.