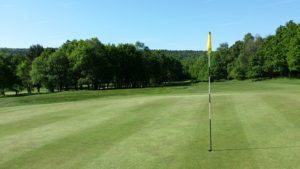 In Kagoshima Prefecture, meanwhile, the company is planning a 92-MW installation on land that was designated and cleared for a golf course, then left unused for three decades.

“The abundance of abandoned golf courses goes back to the real estate boom in the country during the early 90s where many courses were built, but proved economically unsustainable,” Treacy writes. “A similar story has played out here in the U.S. where boom years saw the building of golf courses and resorts, but in recent years, fewer and fewer people are taking up the game.”