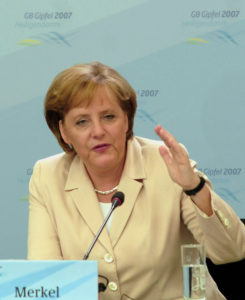 Germany will shutter 2.7 gigawatts of highly-polluting brown coal (lignite) generation by 2020 but has shelved plans for a levy on coal-fired electricity, following months of heated discussion within Chancellor Angela Merkel’s coalition government.

“We are sending an international signal to show we are achieving the switch to renewables in a highly industrialized country,” said Social Democrat Economy Minister Sigmar Gabriel.

But German climate hawks weren’t so sure. The news was “welcomed by industry but condemned by environmental groups, which accused the chancellor of selling out to business interests,” Reuters reports. “In another positive for utilities, the parties also agreed that power providers would be compensated if they participated in a new ‘capacity reserve’ system where brown coal plants can be switched back on if there are power shortages, something the firms had long pushed for.”

The plan includes support for combined heat and power, increased energy efficiency, and a high-voltage transmission line to carry green power from northern Germany to the industrial south.

Germany produces about 44% of its electricity from coal and 27% from renewables.

Days before the government decision, Energy Post published an analysis of the steps Germany’s lignite industry is taking to sustain itself against an onslaught of affordable, reliable renewables. “With an output of 350 million tonnes, four EU countries—Germany, Poland, the Czech Republic, and Greece—account for over a third of the world’s lignite production,” writes correspondent Jeffrey Michel. “Renewable energies have cut into their profitability, but lignite producers are fighting back with increased deliveries and exports to third-party customers.”

While 17 of 20 lignite power plants in Rhineland “could become unprofitable under government climate policies,” he said, “the enduring loyalty of power producers to lignite is comprehensible.” At the most efficient power plants, lignite produces electricity at €0.015/kWh, “considerably lower than any other available alternative. The lignite industry therefore retains a monopoly on Europe’s most economical fuel for power production and for other applications requiring large quantities of thermal energy.”