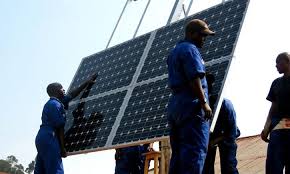 The limited effort so far to design a “just transition” to a low-carbon future has put fossil fuel workers on the defensive, the general secretary of the International Trade Union Confederation told the Thomson Reuters Foundation last week.

Sharan Burrow said coal, oil, and gas workers “need a secure future as the world moves away from fossil fuel use, and governments and companies must plan to ensure any new global climate change deal is fair for all,” Reuters reports.

“We know that if governments and industry aren’t visionary enough to engage in a dialogue, to put the plan in place, to give people security, then we will see distress, fear, and increasingly opposition among people around the world,” Burrows said.

Trade unions want an ambitious deal at the UN climate conference in Paris later this year, “but workers must be given a role in shaping the deep transformation required,” Rowling writes. “The trade union confederation’s call for justice for fossil fuel workers comes as part of a push by major environment and anti-poverty groups to let ordinary people participate in decision-making on how to limit climate change.”

“Our children will work in energy tomorrow—they just won’t work in fossil fuels,” Burrow said. In the interest of “social justice, economic justice and stability,” she called for “negotiated, planned outcomes that people can touch at the national and industry and enterprise level.”