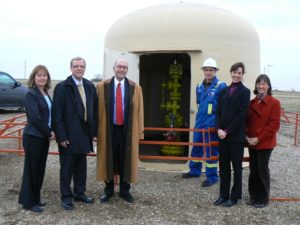 With a federal election less than four months away, a surrogate for Natural Resources Minister Greg Rickford was in Saskatchewan last week to tout the $580 million the federal government has spent on carbon capture and storage (CCS) since 2008.

Ed Komarnicki, Member of Parliament for Souris–Moose Mountain, was on hand to congratulate SaskPower on the opening of its Carbon Capture Test Facility in Estevan, near the Boundary Dam Carbon Capture Project. “This world-class facility will allow companies from across Canada and around the globe to develop and test the next generation of carbon capture and storage technology, improving environmental performance and growing our economy,” Komarnicki said.

A Natural Resources Canada news release pointed to the $580 million expenditure on CCS, more than half the $1.1 billion the government has allocated to “energy technology innovation” since the Harper Conservatives formed their first minority government in 2006, “The federal government is committed to advancing carbon capture and storage projects as part of its efforts to protect the environment and develop energy resources in a responsible manner,” the release stated.

In March, research by Saskatchewan Community Wind characterized Boundary Dam as a billion-dollar subsidy to the fossil fuel industry. “It appears from the analysis that the government is using $1.5 billion of electricity ratepayer funds to build a project that will have only one beneficiary, which is the oil industry of Alberta operating at the Weyburn oilfield,” SCW President James Glennie said at the time. “Saskatchewan ratepayers will lose $1 billion on that investment and that will mean significantly higher electricity prices for the foreseeable future.”