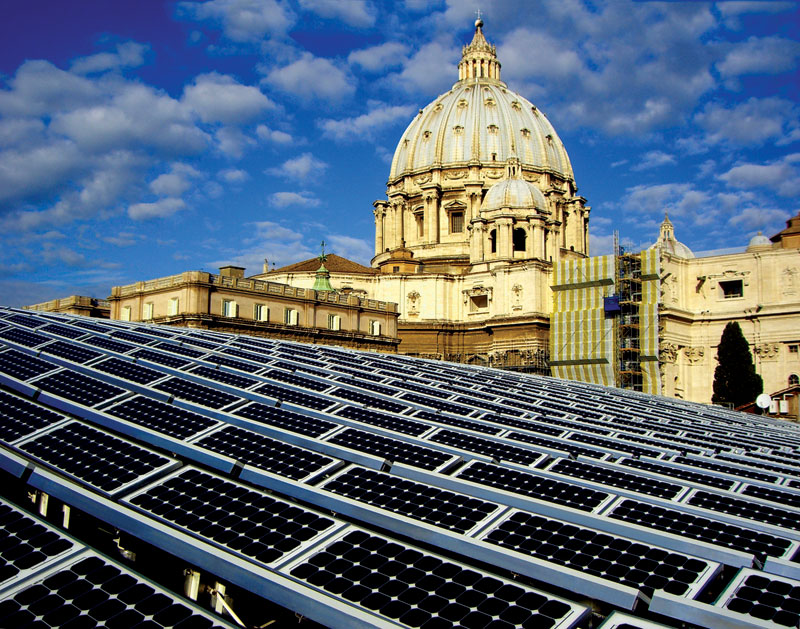 A “bold cultural revolution” will be needed to stop climate change and save a planet that is already “beginning to look more and more like an immense pile of filth,” Pope Francis writes in Laudato Si’ (Praise Be), his long-awaited, 180-page encyclical on climate change released today.

“Science and technology are not neutral; from the beginning to the end of a process, various intentions and possibilities are in play and can take on distinct shapes,” he writes. “Nobody is suggesting a return to the Stone Age, but we do need to slow down and look at reality in a different way, to appropriate the positive and sustainable progress which has been made, but also to recover the values and the great goals swept away by our unrestrained delusions of grandeur.”

Climate change is “one small sign of the ethical, cultural and spiritual crisis of modernity,” reflected in a “structurally perverse” and unequal economic system, Francis writes. “We all know that it is not possible to sustain the present level of consumption in developed countries and wealthier sectors of society, where the habit of wasting and discarding has reached unprecedented levels. The exploitation of the planet has already exceeded acceptable limits and we still have not solved the problem of poverty.”

He adds that “modernity has been marked by an excessive anthropocentrism which today, under another guise, continues to stand in the way of shared understanding and of any effort to strengthen social bonds. The time has come to pay renewed attention to reality and the limits it imposes; this in turn is the condition for a more sound and fruitful development of individuals and society.”

The encyclical endorses the “very solid scientific consensus” that climate change “is real, and will limit drinking water, harm agriculture, lead to some extinctions of plant and animal life, acidify oceans and raise sea levels in a way that could flood some of the world’s biggest cities,” and that global warming is “mainly” a result of human activity, the Associated Press reports.

Francis stresses that “richer countries owe an ‘ecological debt’ to developing countries, whose resources are being extracted to fuel production and consumption in industrialized nations,” AP writes. While “a global consensus is essential for confronting the deeper problems, which cannot be resolved by unilateral actions on the part of individual countries,” the pope writes, the solutions to climate change will depend on an ethical world view, lifestyle changes, and social networks to press for political change and help people left displaced or unemployed by climate change.

Earlier this week, after the encyclical was leaked by the Italian magazine L’Espresso, Reuters quoted scientists, an economist, and one theologian on the potential impact of the landmark statement. “Suddenly, you’re not just doing it for the polar bears, you’re doing it for God,” said Catholic priest Thomas Reese. “I think it makes a big difference.”