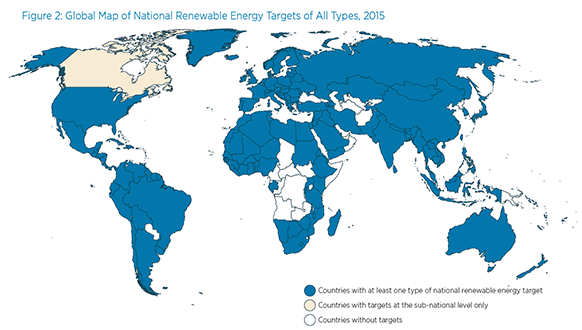 The number of countries with at least one national clean energy target in place has nearly quadrupled since 2005, from 43 to 164, the International Renewable Energy Agency (IRENA) reported last week.

Developing and emerging economies are leading the way, IRENA found, accounting for 131 of the 164 countries on the list. (The map shows Canada with sub-national targets only, with no discernable progress at the federal level.)

“Renewable energy targets have emerged as a popular mechanism to set national and regional economies on the path towards a more secure and sustainable energy future,” said Director-General Adnan Amin. “They provide an important signal to the industry and can help to align stakeholders by creating a clearer, common vision for the development of the energy sector.”

While the large majority of the national targets still focus on clean electricity, IRENA reports that 59 countries are addressing renewable transport, up from 27 in 2005. (h/t to Clean Energy Review for first pointing us to this story.)