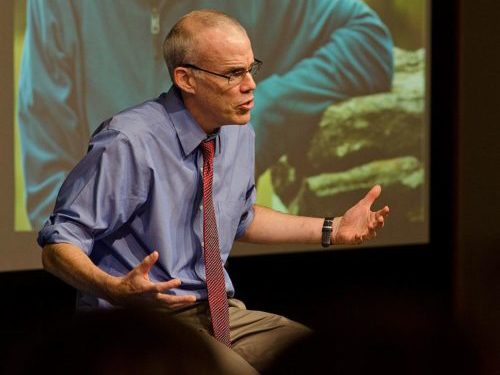 Exxon CEO Rex Tillerson’s “sneering and sad performance” at the company’s recent annual meeting “forever breaks the idea that ‘shareholder engagement’ with companies such as Exxon Mobil accomplishes anything,” 350.org co-founder Bill McKibben argued earlier this week in an opinion piece in the Washington Post.

Some college campuses, investment advisors, and politicians have countered the rise of fossil fuel divestment by trying to advocate change in the companies whose stocks they hold, rather than selling off those stocks in protest. “Engagement can be a sensible strategy for pressuring corporations to address the ways they run their business,” McKibben writes. “Krispy Kreme, for instance, recently announced that it would do a better job of making sure its palm oil comes from a sustainable source because campaigners made such a stink about rainforests being cut down.”

But that doesn’t work when shareholder engagement strikes at a company’s core business, he says, citing Reagan-era Securities and Exchange Commissioner Bevis Longstreth. “Such engagement is like ‘trying to convince Philip Morris to give up making cigarettes or Johnnie Walker to abandon its distilleries.’ It will, he said, ‘most certainly be a fool’s errand.’ Rex Tillerson has proved his point.”

While divestment won’t change policy at a company like Exxon, it will “undercut the industry’s political power, just as happened a generation ago when the issue was South Africa and hundreds of colleges, churches, and state and local governments took action,” McKibben writes. “Divestment is one tool to change the zeitgeist, so that the day arrives more quickly when the richest and most powerful can no longer mock renewable energy and play down climate change.”