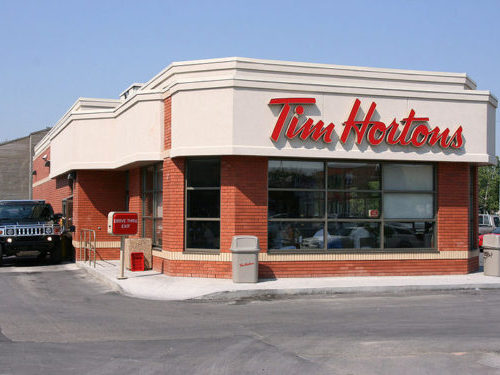 A couple of weeks after the ads began appearing on video screens at 1,500 Tim’s locations across the country, SumOfUs mobilized more than 28,000 supporters to protest the campaign. “Now, when you buy your morning double double at Tim Hortons, you’ll have to watch Enbridge’s slick public relations ads about how great the tar sands are,” wrote campaigner Angus Wong. “Enbridge is desperate to get support to build a massive tar sands and pipeline project from Alberta through British Columbia—and is spending millions to try and reach Canadians and change public opinion.”

“Arg,” tweeted internationally-renowned author Margaret Atwood in response. “You’ll have to watch Enbridge’s slick tar sands ads next time you’re in @TimHortons.” And within a day, the company replied. “We value your feedback and the Enbridge advertisements are no longer airing on Tims TV.”

But that was just the end of the first act, as Alberta Wildrose Party leader Brian Jean and federal Defence Minister Jason Kenney, an Alberta Member of Parliament, joined a boycott over the decision to pull the ads. “I’m pretty sure Tims will correct their mistake quickly, but I don’t think it’s appropriate what they have done,” Jean said. “I’ll pick up my Tims coffee again when they decide to apologize for taking jabs at our industry, which is so important to Albertans.”

In the analysis of the Tim Hortons PR debacle, advertising and marketing CEO Eric Erickson said the Enbridge partnership was a mistake from the start. “Timmy’s was probably best suited to not dive into that pool in the first place,” he told CBC.