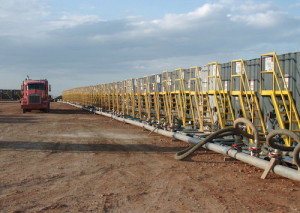 Both sides in the local and regional battles over fracking declared victory, issuing divergent enough interpretations of the report that FactCheck.org came out with its own analysis.

InsideClimate News pointed to the report as a watershed moment in the EPA’s analysis of fracking, despite a “piecemeal picture of fracking-related incidence” and the absence of a national database of fracking wells or incidents of contamination.

“In the past, top Obama administration officials such as former EPA administrator Lisa Jackson and Energy Secretary Ernest Moniz maintained that there was no evidence fracking had fouled drinking water,” Banerjee writes, “despite findings to the contrary by EPA’s own scientists in several highly publicized cases. The acknowledgment of instances of fracking-related contamination marks a notable reversal for the administration.”

“Today EPA confirmed what communities living with fracking have known for years: fracking pollutes drinking water,” said Earthworks Policy Director Lauren Pagel. “Now the Obama administration, Congress, and state governments must act on that information to protect our drinking water, and stop perpetuating the oil and gas industry’s myth that fracking is safe.”

“With this new report, it couldn’t be clearer that shale development is occurring in conjunction with environmental protection—and the claims by anti-fracking activists have been thoroughly debunked,” wrote Katie Brown of Energy In Depth.