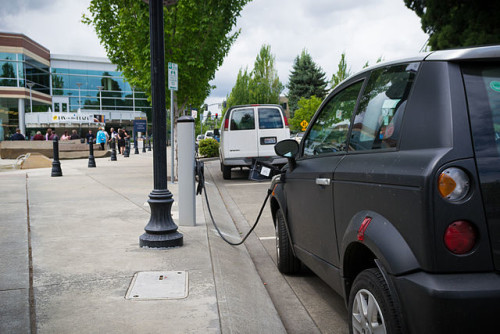 The power companies “say their customers will benefit, too—even those who don’t own EVs,” EnergyWire reports.

Several states are working on legislation that would allow utilities to include EV charging networks in their rate base. EnergyWire profiles Kansas City Power & Light’s effort to recover costs for its $20-million Clean Charge Network as an important test case.

“The network, to be completed this summer, is being developed with partners ChargePoint and Nissan Motor Co.,” Tomich writes. “It would support as many as 10,000 EVs, and users would be allowed to charge their cars at no cost for the first two years.”

KCP&L spokesperson Chuck Caisley said the project would open some important policy issues in Kansas and Missouri—including the familiar question of whether all ratepayers should share the cost of infrastructure that only a few will use at first.

“According to KCP&L, the answer is yes, all utility customers will benefit,” Tomich reports. “At its core, the plan addresses the biggest challenge faced by the utility industry and—by extension—its customers. Electricity sales growth is flat. But costs, including those required to meet more stringent environmental regulations, are increasing. Helping stimulate adoption of plug-in vehicles helps address the disconnect by enabling use of existing power plants that sit idle much of the time.”

While KCP&L supports distributed generation and rooftop solar, Caisley noted that a decision against the EV charging network could have wider implications. “If the commission denies recovery for this, I think it unwittingly gives us the precedent to completely stop solar in our jurisdiction,” he said.