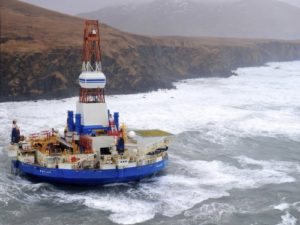 #sHellNo! was the rallying cry over the weekend as more than 500 climate activists in Seattle boarded kayaks, canoes, paddleboards, and a solar-powered party barge to protest Shell’s Arctic drilling rig, the Polar Pioneer.

Grist has the must-see photos.

The oil giant came to town Thursday “over objections from the mayor, city council, and a whole lot of pissed-off Seattleites,” Grist reports. “The kayaktivists made their objections clear—and made for a pretty spectacle against the blue-gray background of Puget Sound.”

Two days later, protesters blocked roads to the Port of Seattle, where the rig is located, preventing the majority of port workers from getting to their jobs. Activists “successfully blocked traffic on the West Seattle bridge early in the morning and then created a blockade at the port’s Terminal 5, where the Polar Pioneer is parked,” reports Grist correspondent Ana Sofia Knauf.7