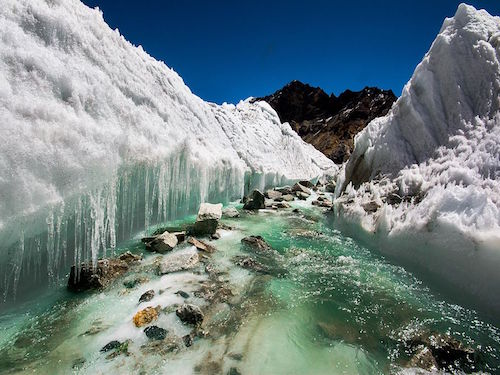 “Climate change may play a critical role in triggering certain faults in certain places where they could kill a hell of a lot of people,” McGuire said. “Some of his colleagues suspect the process may already have started,” Newsweek reported in the wake of the first of two devastating earthquakes in Nepal.

The “untold and terrifying story” behind the Nepal earthquakes “begins with something that sounds quite benign,” Renton explains. “It’s the ebb and flow of rainwater in the great river deltas of India and Bangladesh, and the pressure that puts on the grinding plates that make up the surface of the planet.” Geologists know that seismic faults “are very sensitive to the small pressure changes brought by change in the climate,” he writes. “And a sensitive volcano or seismic fault line is a very dangerous one.”

Ice loss, sea level rise, and flooding will shift the weight on the planet, a process that McGuire describes as “waking the giant.” He adds that “these stress or strain variations, just the pressure of a handshake in geological terms, are perfectly capable of triggering a quake if that fault is ready to go.”