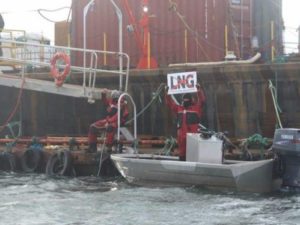 Malaysia’s state-owned energy company, Petronas, is offering the Lax Kw’alaams First Nations community near Prince Rupert a $1-billion cash settlement over 40 years if it consents to a major liquefied natural gas (LNG) development on its territory.

The Globe and Mail describes the offer as “a groundbreaking proposal that could establish the new price for natural resource development in traditional Aboriginal territories,” one that “sets a new benchmark for sharing the wealth from energy extraction.”

“This will be a real game-changer for many First Nations in terms of how they can build their future,” said British Columbia Aboriginal Relations and Reconciliation Minister John Rustad. The community would also receive 2,200 hectares of Crown land around Prince Rupert harbour.

Lax Kw’alaams members will vote on the offer this month.

Hunter and Jang note that Petronas’ proposal reflects a major shift in its dealings with First Nations. “Petronas is aggressive to the point of being offensive to Lax Kw’alaams and seems, as a corporation, to have no idea how to successfully operate in Canada with Aboriginal people,” the community said in a March, 2014 report. “Petronas does not seem to understand that a social licence to move ahead with their project is not something they give to themselves.”