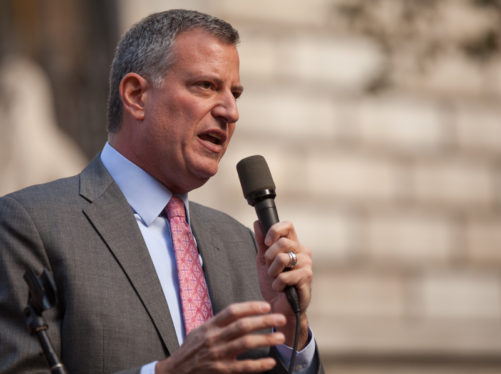 New York City Mayor Bill de Blasio has set out to meld sustainability and social justice through OneNYC, a plan to cut greenhouse gas emissions, boost energy efficiency, expand renewable energy and green infrastructure, and lift 800,000 residents out of poverty or near poverty by 2025.

“We know that if we only have environmental sustainability and end up with a gilded city only for the most wealthy, it will no longer be New York,” de Blasio said. “And equally, if we have a city filled with economic opportunity and inclusion but it isn’t environmentally viable and sustainable, it won’t work. So we’ve got to bring these two pieces together.”

Nearly half of New York City residents live at or near the poverty line. “They often live in less efficient buildings than wealthier residents,” GreenBiz notes, and energy bills “are a much higher proportion of housing expenses for low-income people, amounting to a regressive tax.”

Elements of OneNYC include $100 million in new energy efficiency funding for low-income housing, public and private sector building upgrades to cut energy costs by $1.4 billion per year, and 350 MW of solar on public and private buildings, with panels paired with storage on emergency shelters.

“When Hurricane Sandy hit, environmental justice advocates pointed out how we couldn’t think about physical vulnerability to climate change without thinking about local economics and inequality,” said Juan Camilo Osorio of the NYC Environmental Justice Alliance, in an interview with InsideClimate News.