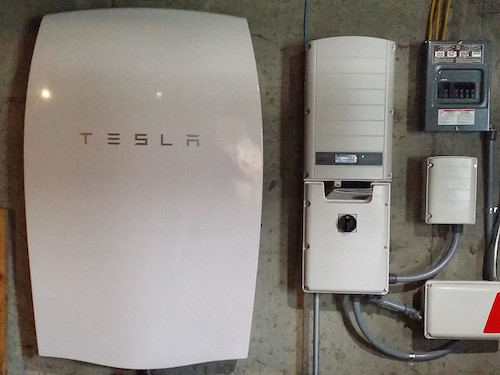 The clean energy revolution entered a new phase yesterday with the formal release of Tesla’s Powerwall, a US$3,000 battery system that will provide storage for solar panels on homes and businesses and could help users cut their ties with traditional power utilities.

“Our goal here is to fundamentally change the way the world uses energy,” Tesla CEO Elon Musk told media during a launch event at the company’s design studio in Hawthorne, CA, near Los Angeles International Airport.

With yesterday’s announcement, Musk “is trying to steer his electric car company’s battery technology into homes and businesses as part of an elaborate plan to reshape the power grid with millions of small power plants made of solar panels on roofs and batteries in garages,” AP reports.

“Musk is so encouraged by the initial demand that he believes Tesla and other future entrants in the market will be able to sell two billion battery packs around the world—roughly the same number of vehicles already on roads,” AP writes. “Although that may sound like a ‘super crazy’ goal, Musk insisted it ‘is within the power of humanity to do.’”

Peter Rive, chief technology officer at Tesla partner SolarCity (and a cousin of Musk, who is SolarCity’s chair and largest shareholder), acknowledged that the Powerwall’s initial price tag could discourage widespread adoption. “I don’t believe this product in its first incarnation will be interesting to the average person,” he said. One of the major purposes of Tesla’s gigawatt-scale battery factory, now under construction outside Reno, NV, is to drive down the unit cost of production.

The batteries are on sale in the United States right now, through the Tesla website or a network of approved partners. SolarCity has distributed 300 of the batteries so far.