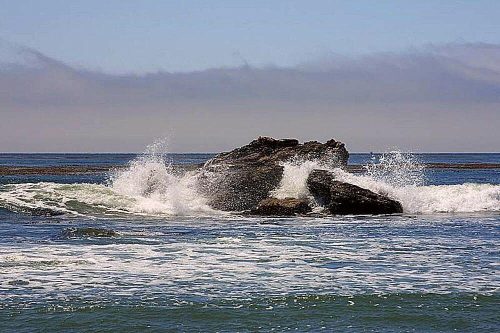 An apparently promising way of producing energy from the world’s oceans in fact risks causing catastrophic harm by warming the Earth far more than it can bear, US scientists say. LONDON, 4 April, 2015 − One of renewable energy’s more outspoken enthusiasts has delivered bad news for the prospects of developing ocean thermal energy. His prediction is that although the technology could work for a while, after about 50 years it could actually exacerbate long-term global warning. Of all the renewable energy technologies, ocean thermal energy conversion (OTEC) sounded like the perfect choice. This is a plan to exploit the difference between the warm surface and the cold deeps of the seas, and turn that difference into energy. The agency that did the work would be a network of vertical pipes floating below the surface: it would not spoil the view from the coast, and it would deliver power day or night, whatever the weather. But there was more. Enthusiasts pointed out that as a bonus, the pipes used in the energy conversion would bring a flow of nutrients from the cold, deep waters to the less-fertile but sunlit surface of the ocean, thus encouraging the growth of marine algae that would soak up more carbon from the atmosphere. And, as a bonus, the same process would accelerate the downward flow of carbon, where it could be sequestered on the sea bed. Now one of renewable energy’s more vocal supporters has taken a closer look at the long-term consequences of the ocean pipes and come up with some discouraging news: an engineering programme intended to cool the planet would end up making it warmer. It would work for a while, he says, but after about half a century it would reduce the cloud cover and at the same time reduce the sea ice, to accelerate climate change once more.

Ken Caldeira, senior scientist in the Department of Global Ecology at Stanford University’s Carnegie Institution, California, is one of the more energetic voices in climate research: he and his Carnegie colleagues have already warned that the world is feeling the heat from carbon dioxide released from car exhausts and factory chimneys and he has spoken up loudly for nuclear power, and indeed any “clean” energy sources. He and Stanford colleagues Lester Kwiatkowski and Katharine Ricke report in Environmental Research Letters that when they began to simulate an ocean dotted with vertical pipes that exchanged deeper and shallower waters, they expected to confirm the value of such an approach. They could not. “Our simulations indicate the likely sign and character of unintended atmospheric consequences of such ocean technologies,” they conclude, in formal science-speak. “Prolonged application of ocean pipe technologies, rather than avoiding global warming, could exacerbate long-term warming of the climate system.” Research exercises such as this one cost nothing more than laboratory computing power and research time: their value once again is in reminding governments, campaigners and energy investors that the climate is an intricate piece of global machinery, and that there are no easy answers to the problems presented by renewable energy.

They are also a reminder that geo-engineering of any kind to damp climate change could have unintended consequences. In this case – in an ideal, global simulation – it would change the thermal structure of the ocean altogether. The Carnegie calculations work like this: cold air is denser than warm air. Water funnelled up the pipes on a very large scale from the depths would cool the air above the seas, and increase atmospheric pressure, which would reduce cloud formation over the seas. Since most of the planet is ocean, that means fewer clouds overall, which means more sunlight absorbed by the Earth rather than reflected back into space by the clouds. And the same mixing of sea waters would bring sea ice into contact with warmer waters, which would mean less sea ice to reflect radiation, with the same result: accelerated global warming. After 60 years, the simulated network of ocean pipes would cause an increase of global temperature by up to 1.2°C. After a few centuries, the same technology would take temperatures up by a catastrophic 8°5C. “I cannot envisage any scenario in which a large scale global implementation of ocean pipes would be advisable,” said the report’s lead author, Dr Kwiatkowski. “In fact, our study shows it could exacerbate long-term warning and is therefore highly inadvisable at global scales.” – Climate News Network