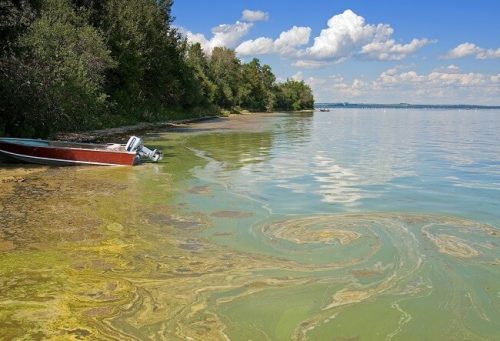 Scientists warn that excessive use of fertilizers, combined with warmer water in lakes, threatens to poison drinking water supplies. LONDON, 13 March, 2015 − Blue-green algae blooms that can turn toxic in freshwater lakes and can kill bathers, farm animals and domestic pets that drink the water are becoming more widespread across the world, according to new research. A combination of excess use of fertilizers containing phosphorus and nitrogen, untreated sewage releases, and warmer water caused by climate change is leading to an increasing threat of poisoning to animals and humans that use the lakes for water supplies. Researchers from France, Italy, Spain, the UK, Malaysia and Canada contributed to the study aimed at discovering whether the algae known as cyanobacteria, which forms a blue-green scum on the surface of lakes, was really increasing or had simply been more widely reported. The scientists looked closely at 100 lakes in North America and Europe, but their findings would apply to freshwater bodies worldwide. They showed that algae blooms have been increasing over the past two centuries, but the pace has “sharply accelerated since the mid-20th century”.

Not all blue-green algae growths release poisons into the water, but when they form a scum they frequently release toxins that cause damage to the liver and nervous systems of animals, and can be deadly. The most common symptoms in humans of acute exposure to harmful algal blooms are skin rash or irritation, gastroenteritis, and respiratory distress. Chronic, low-dose exposures over a lifetime may result in liver tumors or endocrine disruption, and have also been linked to longer-term degenerative conditions of the nervous system, such as Alzheimer’s, Parkinson’s and Lou Gehrig’s Disease. The study says that lakes subject to excess discharge of industrial fertilizers and sewage had seen the largest increase in blue-green algae blooms, but alpine lakes without these problems has also had an increase, indicating that climate change was also a factor. In North America, lowland lakes had a 61% increase in blue-green algae blooms, and this rose to 70% in Europe. Both were close to agriculture areas, but alpine lakes further away from farming showed only a 36% increase. Dr. Zofia Taranu, a biologist at McGill University, Canada, and lead author of the study published in Ecology Letters, says: “Further work as a society will therefore be needed to reduce nutrient discharges to surface waters.”

“Partnerships among freshwater scientists and farmers are starting to happen, and more of this needs to take place”

The study says it is possible to treat water by adding chemicals that bind the toxins together, and to remove them before they reach the tap, but many municipalities do not regularly look for the danger because it has previously not been a problem. Even so, both the UK and Australia are spending $100 million a year monitoring and eliminating blue-green algae from drinking water. Water catchment control to keep fertilizer and sewage away from drinking water sources, which has been imposed by the EU Water Framework Directive, is essential to prevent the danger to the general population, the report concludes. Dr Suzanne McGowan, head of the University of Nottingham School of Geography, UK, and PhD researchers Heather Moorhouse and Mark Stevenson, based at the university, took sample cores of sediment from bodies of water in the British Isles, including in the English Lake District, the meres of the West Midlands, lochs in Scotland, and upland lakes in Northern Ireland.

These were then analysed for pigments that are left behind by blue-green algae, and which remain stable over thousands of years − acting as biomarkers that reveal past levels of algae found in the water during the course of decades. The analysis showed that, during the last 200 years, more than half of the lakes (58%) had seen significant increases in concentrations of blue-green algae pigments, whereas only 3% showed a significant decrease. “Our work shows that we need to work harder as a society to reduce nutrient discharges to surface waters,” says Irene Gregory-Eaves, an associate professor of biology at McGill, and co-author of the study. “Because diffuse nutrient loading – as opposed to end-of-pipe effluent –  is the main issue, we need to build collaborations to tackle this complex problem. “For example, partnerships among freshwater scientists and farmers are starting to happen, and more of this needs to take place, so that we can strike a balance between maximising crop yields and minimising excess fertilizer application.” – Climate News Network