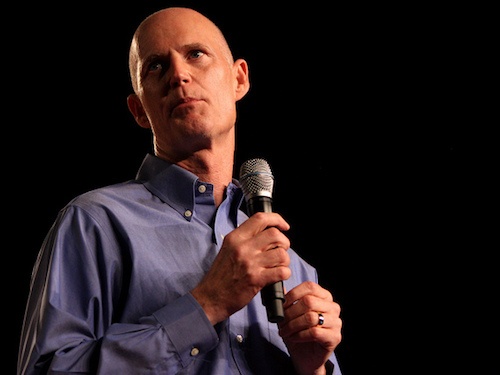 In a move described as Orwellian, the Florida Department of Environmental Protection (DEP) has banned staff from using the terms ‘climate change’, ‘global warming’, or ‘sustainability’ in official communications, emails, or reports, according to former DEP employees, consultants, volunteers, and records obtained by the Florida Center for Investigative Reporting.

The “unwritten policy” went into effect after Gov. Rick Scott took office in 2011, according to a Center exposé. “Gov. Scott, who won a second term in November, has repeatedly said he is not convinced that climate change is caused by human activity, despite scientific evidence to the contrary.”

A departmental press secretary and a Scott spokesperson both denied there was a policy in effect. “But four former DEP employees from offices around the states say the order was well known and distributed verbally statewide,” the Center reports.

“We were dealing with the effects and economic impact of climate change, and yet we can’t reference it,” said one former employee. “We were told that we were not allowed to discuss anything that was not a true fact,” agreed Kristina Trotta, another former DEP staffer in Miami.

“It’s an indication that the political leadership in the state of Florida is not willing to address these issues and face the music when it comes to the challenges that climate change presents,” added ex-DEP attorney Christopher Byrd.

The Center’s report has received wide coverage over the last 72 hours, with climate hawks commenting that the Florida coast will still be overtaken by sea level rise, whether or not the state government chooses to understand why. “Sea-level rise alone threatens 30% of the state’s beaches over the next 85 years,” Korten writes.

Heat is on to slow down faster rise in temperatures