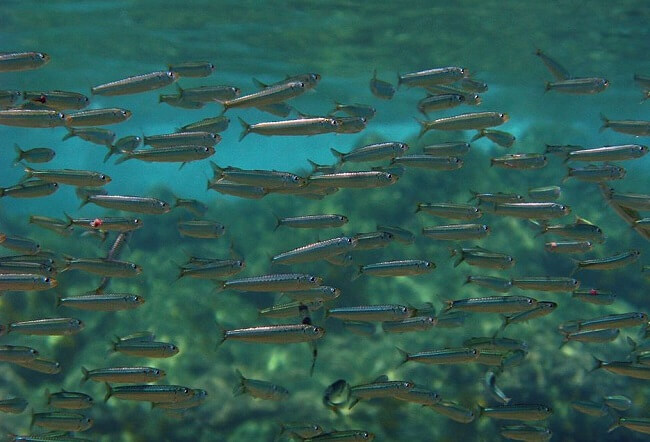 A shoal of sardines in their normal habitat in the Mediterranean Sea.

Fish species in subtropical European waters are migrating north to escape warming seas − leaving fishermen who rely on them for a living with empty nets. LONDON, 20 February, 2015 − Several important fish species that for centuries have been part of the staple diet of people in the Mediterranean region are abandoning sub-tropical seas because the water is too warm and are heading north. Sardines, which for generations have been the most abundant commercial fish species in Portugal, are moving away. They are now established in the North Sea, and are being caught in the Baltic – a sea that until recently was normally frozen over in the winter. Sardines, anchovies and mackerel − three fish species that are important in the diet of many southern European and North African countries − have been studied by scientists trying to discover how climate change and warming seas are affecting their distribution.

As well as the affect on the fishing industry, the abundance or disappearance of these species is crucial for many other marine species that rely on them for food. A pioneering study, published in Global Change Biology, analysed 57,000 fish censuses conducted over 40 years, and has tracked the movement of these fish during this period. It confirms that the continued increase in water temperature has altered the structure and functioning of marine ecosystems across the world. But it also shows that the effect has been greater in the North Atlantic, with increases of up to 1.3 ºC in the average temperature over the last 30 years. This variation in temperature directly affects the frequency and range of pelagic fish, which live in the middle of the water column and are directly influenced by temperature, rather than habitat. It includes the sardine (Sardina pilchardus), anchovy (Engraulis encrasicolus), horse mackerel (Trachurus trachurus) and mackerel (Scomber scombrus), among others.

They feed off phytoplankton and zooplankton, and are themselves the staple diet of large predators, such as cetaceans, large fish and marine birds. These fish occur off the shores of many coastal countries in the world and are important sources of protein. Scientists have known that fish were moving to new areas, but did not know whether it was in response to their main food supply plankton moving first or whether it was a simple response to changing temperatures. The new study has developed statistical models for the North Sea area, and confirms the great importance of sea temperatures. “Time series of zooplankton and sea surface temperature data have been included to determine the factor causing these patterns,” Ignasi Montero-Serra, lead author of the study and researcher in the department of Ecology at the University of Barcelona, explains to the Scientific Information and News Service. To demonstrate the consequences of the warming of the seas, the research team analysed fish censuses from commercial fishing performed independently along the European continental shelf between 1965 and 2012, extracted from data provided by the International Council for the Exploration of the Sea. The study, which is the first to be carried out on such a large timescale and area, allows for the dynamics of this species to be understood in relation to the rapid warming of the oceans that has been happening since the 1980s. The results reveal that sardines and other fish with fast life cycles, planktonic larval stage and low habitat dependence are highly vulnerable to changes in ocean temperature, and therefore represent, Montero-Serra says, “an exceptional bioindicator to measure the direction and speed of climate change expected in the near future”.

Montero-Serra says that accelerated increase in temperature of the continental seas has resulted in sardines and anchovies − with a typically subtropical distribution − increasing their presence in the North Sea and “even venturing into the Baltic Sea”. And the presence of species with a more northern distribution, such as the herring and the sprat, has decreased. The analysis is therefore a clear sign that species in the North Sea and Baltic Sea are “becoming subtropical”. This is due to the pelagic fish being highly dependent on environmental temperatures at different stages of their life cycle − from reproductive migrations and egg-laying, to development and survival of larvae. According to the researchers, the changes in such an important ecological group “will have an effect on the structure and functioning of the whole ecosystem”, although they still do not know the scale of the socio-economic and ecological repercussions. – Climate News Network