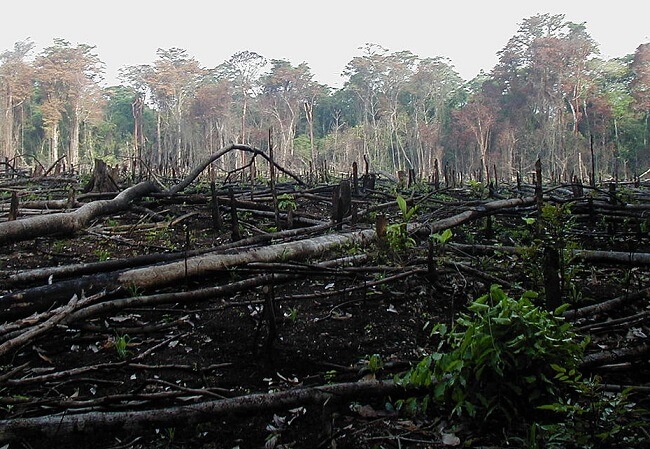 Tropical forest burned and cleared for agriculture in southern Mexico.

UK thinktank says inaction by the ‘Forest 500’ means global efforts to end deforestation by 2030 are not keeping pace with the rate of destruction. LONDON, 11 February, 2015 − The world will not, on present rates of progress, reach its goal of ending tropical deforestation within 15 years. The Global Canopy Programme (GCP), a thinktank based in Oxford, UK, says many of those who could protect the forests by ensuring that deforestation does not contribute to commodity supply chains are failing to act. The GCP, which draws together international experts on tropical forests, has compiled what it says is the first comprehensive ranking of the “Forest 500” − power brokers who control the global supply chains that drive over half of tropical deforestation.

It has identified, assessed and ranked 250 companies, with total annual revenues of more than US$4.5 trillion; 150 investors and lenders; 50 countries and regions; and 50 other influential actors, as it calls them – a wide-ranging group of banks, international agencies and non-governmental organisations. Together, the 500 control the complex global supply chains of key “forest risk commodities” − such as soya, palm oil, beef, leather, timber, pulp and paper − that have an annual trade value of more than $100 billion and are found in over 50% of packaged products in supermarkets. The GCP says only a small minority of the 500 have equipped themselves to tackle this problem, which makes a significant contribution to climate change and other environmental problems, as well as worsening poverty. Deforestation and land use change cause more than 10% of global greenhouse gas emissions, undermine regional water security, and threaten the livelihoods of more than a billion people. Assessed against dozens of policy indicators, only seven of the Forest 500 scored the maximum number of points − companies Groupe Danone (France), Kao Corp. (Japan), Nestlé S.A. (Switzerland), Procter & Gamble (US), Reckitt Benckiser Group (UK), Unilever (UK), and banking and financial services giant HSBC (UK).

“Deforestation is in our chocolate and our toothpaste, our animal feed and textbooks, buildings and furniture, investments and pensions”

At the other end of the scale, the GCP says, 30 companies − many based in Asia and the Middle East − and numerous investors scored zero points. Countries received varied scores, with Latin American nations scoring high in forested regions and the Netherlands and Germany coming top among countries that import forest risk commodities. Of investors assessed, sovereign wealth funds and hedge funds scored very low for their sustainable investment policies, while banks achieved higher scores. “We are currently all part of a global deforestation economy,” says Mario Rautner, a GCP programme manager.  “Deforestation is in our chocolate and our toothpaste, our animal feed and our textbooks, our buildings and our furniture, our investments and our pensions.” “Our goal with the Forest 500 is to provide precise and actionable information to measure the progress of society to achieve zero deforestation.

“Together, these 500 countries, companies and investors have the power to clean up global supply chains and virtually put an end to tropical deforestation.” He adds: “Though the Forest 500 findings highlight that much work needs to be done, the good news is that a number of big players across sectors are demonstrating the leadership that is needed. “Putting policies in place is just the necessary first step in addressing tropical deforestation, and their implementation will be critical in order to transition to deforestation-free supply chains by 2020.” At the UN Climate Summit last year, prominent representatives from business, governments, indigenous communities and civil society signed the New York Declaration on Forests. It spells out ambitious commitments to halve deforestation by 2020 and to end it by 2030. A similar pledge to achieve net zero deforestation by 2020 has been made by the Consumer Goods Forum, a global association of companies and service providers, including major manufacturers and retailers. − Climate News Network

Rice serves up double measure of biofuel and fodder