Germany cut emissions and boosted renewables last year, but critics say CO2 reduction targets can’t be met unless it closes coal-burning power stations. BERLIN, 20 January 2015 − The energy market in Germany saw a spectacular change last year as renewable energy became the major source of its electricity supply − leaving lignite, coal and nuclear behind. But researchers calculate that, allowing for the mild winter of 2014, the cut in fossil fuel use in energy production meant CO2 emissions fell by only 1%. Wind, solar, hydropower and biomass reached a new record, producing 27.3% (157bn kilowatt hours) of Germany’s total electricity and overtaking lignite (156bn kWh), according to AGEB, a joint association of energy companies and research institutes. This was an achievement that many energy experts could not have imagined just a few years ago.

Beyond that, Germany’s primary energy consumption – which includes the energy used in power generation, heating and transport − fell to its lowest level since reunification with East Germany in 1990, AGEB report. It shrank by 4.8% compared with 2013. Estimates by AGEB indicate that Germany’s CO2 emissions will have fallen in 2014 by around 5% compared with 2013, as consumption of all fossil fuels fell and the contribution from renewables rose. Half the CO2 savings came from power generation. Germany’s use of hard coal − sometimes called black coal, which emits much less CO2 than brown coal, as lignite is known − in electricity generation was 7.9% lower than in 2013, and lignite 2.3%. The share of fossil fuels in the overall energy mix fell from 81.9% in 2013 to 80.8%.

At first sight, that looks like a big success story. But it comes after several years of rising emissions that have cast doubt on the “Energiewende” − the ambitious German energy transition plan for a simultaneous phase-out of nuclear power and a move to a carbon-free economy. While all of Germany’s remaining nine nuclear power plants must by law be shut down no later than the end of 2022, there is no such legally-binding phase-out for the coal industry. So no one can tell how long Germany will go on burning the worst climate change contributors, lignite and hard coal.

In July 2014, a group of NGOs published a study on the EU’s 30 worst CO2-emitting thermal power plants. German power stations featured six times among the 10 dirtiest. 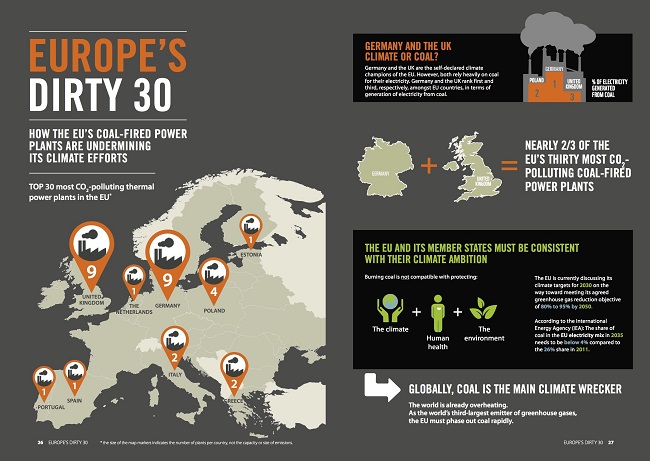 Never heard of Neurath, Niederausssem, Jänschwalde, Boxberg, Weisweiler and Lippendorf? These are the sites of Germany’s lignite-powered stations, which together emit more than 140 megatonnes of CO2 annually − making Germany Europe’s worst coal polluter, followed by Poland and the UK. And international banks, including Germany’s biggest investment bank, keep on financing coal. A study by BankTrack shows that 92 commercial banks financed the coal industry in 2013 to the tune of at least €66bn – a new record. The top investor was the US bank JP Morgan Chase. Deutsche Bank was tenth. That level of investment puts into perspective the US $10bn that is now in the UN’s Green Climate Fund to help developing nations fight climate change. Germany has one of the most ambitious climate targets worldwide: by 2020, its CO2 emissions are due to be 40% below their 1990 level. But how can it achieve this?

The latest Climate Protection Action Plan, adopted by the German Cabinet on 3 December last year, says that 22 million tonnes of CO2 will be saved “by further measures, especially in the power sector”. Does that mean less power from coal? In any case, it will not put Germany back on track, as nearly 80 million tonnes of CO2 must be saved to reach the country’s 2020 climate goals. The Greens pointed out that a coal-fired power plant such as Jänschwalde alone produces more than 22 million tonnes of CO2 − and Jänschwalde is not even the biggest German polluter. So, right now, the Energiewende seems a story both of success and of failure. Mojib Latif, the German meteorologist and oceanographer who co-authored the IPCC’s Fifth Assessment Report, says: “The only way of countering the rise in CO2 is to expand renewables. The technology is there − it just has to be used. “My most urgent wish for the energy future is that Germany must stop using coal. Otherwise we have no chance of achieving our climate targets.” − Climate News Network