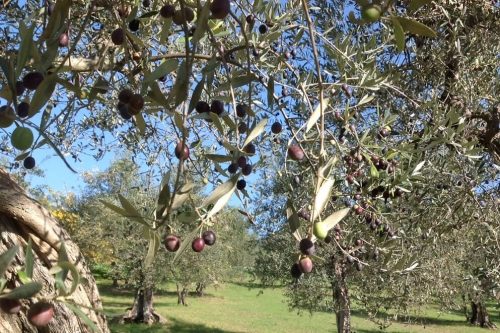 Worldwide consumption of olive oil has grown rapidly in recent years, but climate extremes and disease have seriously damaged this year’s crop in many regions and pushed prices up. LONDON, 2 December, 2014 − Attention all those cooks who cannot produce a meal without adding a splash or drizzle of olive oil. The price of your favourite culinary ingredient is rising fast – driven in large part by changes in climate. Spain accounts for nearly 50% of total world olive oil production, but an unusually warm spring this year caused damage to olive trees during their flowering period. Then a prolonged drought hit many regions − including the southern province of Andalucía, which produces 70% of Spain’s crop. As a result, this year’s harvest is predicted to be half that of 2013. In Italy, which has 15% of world production, a mild winter and warm spring was followed in summer by cloudbursts of torrential rain in many areas. Farmers and processors are describing 2014 as the worst year for olive oil production in living memory, with overall yields down by nearly 40%.

The warm spring and generally humid conditions in Italy are also believed to have encouraged the spread of the Xylella fastidiosa pathogen – which blights trees, causing them to wilt and shed their leaves – and given rise to infestations of the olive fruit fly, Bactrocera oleae Both have devastated crops in many areas, and autumn hail storms have added to the woes of Italy’s olive oil producers. Olive farmers in southern France, northern Africa and other olive oil producing regions round the Mediterranean Basin have faced similar problems. Producers are now predicting a big hike in olive oil prices worldwide − in some markets, prices have gone up by 30%.

In its latest assessment report on global climate, the UN’s Intergovernmental Panel on Climate Change warned of the impact of increasing temperatures in the Mediterranean Basin region, with the possibility of more droughts and increasing desertification. Such warming has serious implications for a region that is a world leader in the production not only of olives, but also a wide range of other crops. Worldwide consumption of olive oil has risen sharply over the last 20 years, with consumers rushing to buy a product that is not only a tasty addition to various dishes but is also believed to be good for the health.

To meet demand, farmers and large agricultural corporations around the Mediterranean region have rushed to grub out old, often terraced, rain-fed olive groves, replacing them with large plantations of olive tree monoculture. These newly-planted areas, particularly in southern Spain, are fed by water that is often piped in from hundreds of miles away. When there’s a drought – or when disease or pests strike – the large plantations are vulnerable. Olive oil production is very much an up and down business. A bumper crop in the Mediterranean region in 2013 is believed to have contributed to this year’s downturn: trees are tired after over producing last year. But the outlook is not good. As temperatures rise in southern Europe and around the Mediterranean, olive oil production will come under increasing pressure – and prices will continue their upward trend, hitting the pockets of all those keen cooks. – Climate News Network