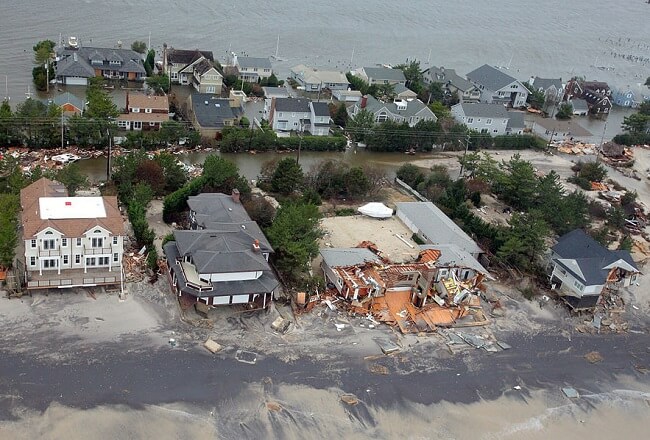 Devastation in New Jersey after the US east coast was hit in 2012 by the Hurricane Sandy superstorm.

Disasters linked to climate change could cost insurance companies billions of dollars, but a new survey finds that many of them − particularly in the US − are paying scant attention to the threat. LONDON, 30 October, 2014 − Insurance is all about assessing risk, so you might expect companies in the sector to be intimately involved with one of the most potent risks facing the world – the possibility of catastrophic climate change. Yet a survey by Ceres, a US not-for-profit group that lobbies for more environmental awareness in the business sector, has found a startling lack of action by most insurers on the issue. In total, more than 300 insurers − a large proportion of them based in the US − were canvassed and then given various ratings associated with their response to climate change –ranging from “leading” to “minimal”. “Most of the companies responding to the survey reported a profound lack of preparedness in addressing climate-related risks and opportunities,” the Ceres report says. “Only nine insurers, or three per cent of the 330 companies overall, earned a ‘leading’ rating.”

The Ceres survey examined the structures and management that companies have in place to deal with climate change, their forecasting techniques, how they communicate on the issue with policyholders and investors, and how the companies were dealing with their own carbon emissions. On all counts, the majority of companies were found wanting, with the relatively smaller companies performing less well than the bigger concerns. The insurance industry is considerably bigger in the US than elsewhere, but only two of the nine companies that earned leading ratings in the survey are based in the US. Non-US companies that gained a leading rating include the re-insurers Swiss Re and Munich Re, and the XL Group.

Property and Casualty insurers are on the frontline of climate change risks, and “there is compelling evidence those risks are growing”

The survey looked in detail at two key segments of the insurance industry: Property and Casualty (P&C), and Life and Annuity (L&A). Ceres says P&C insurers are on the frontline of climate change risks, “and there is compelling evidence those risks are growing”. Hurricane Sandy, which hit the Caribbean and the eastern seaboard of the US in late 2012, resulted in $29 billion of insured losses in the US. “A tremendous amount of property (both insured and uninsured) is increasingly threatened by sea level rise,” Ceres says. A report earlier this year by CoreLogic, a financial analysis and advisory company, identified more than 6.5 million homes in the US at risk of storm surge damage, with a total reconstruction value amounting to $1.5 trillion. “Extreme weather is also exacerbating supply chain risks and causing business interruption losses,” Ceres says. In 2011, there was serious flooding in Thailand, and international companies with manufacturing plants there suffered between $15 billion and $20 billion in losses.

Most P&C insurers pay inadequate attention to climate risks, but the L&A segment of the industry is even more lax, Ceres says. L&A insurers have trillions of dollars worth of investments that may be affected by climate change. If those investments are not managed with climate change in mind, then profit margins will suffer and companies might struggle to meet their liabilities in the long term. The insurance industry also isn’t paying nearly enough attention to how global warming will affect human health and mortality, Ceres warns. The survey shows that most health insurers are not preparing for climate change-related temperature extremes, decreasing air quality, and the increased spread of diseases. “As risk carriers, risk managers and major investors, every insurer should develop and issue a public climate risk management policy for the benefit of their shareholders, policy holders and employees,” Ceres recommends. Separately, the Bank of England, the UK’s central bank, has written to 30 leading insurance companies asking for information on how they assess the impact of climate change-related events on their operations. – Climate News Network