‘Amazon of UK’ being destroyed for grouse shooting 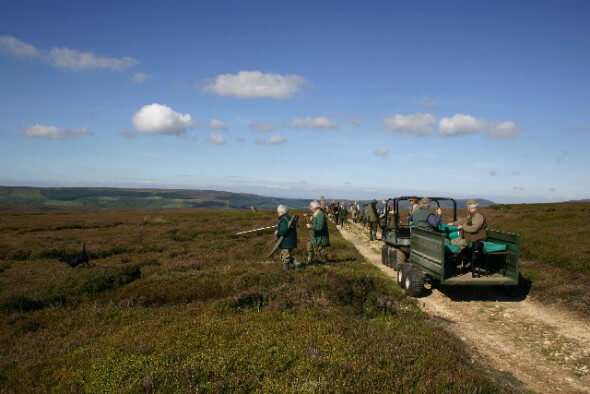 Killing fields: a grouse shooting party sets out on the North Yorkshire moors in the UK

Managing moorlands so that more birds can be reared for lucrative shooting parties is adding to climate change by destroying layers of peat and releasing large quantities of stored carbon dioxide into the atmosphere. LONDON, 6 October, 2014 − Burning large tracts of heather on the peat-covered hills of Britain so that more red grouse can be reared for the rich to shoot has always been controversial. The revenue from overseas visitors flying in from such places as the Middle East and Japan to shoot birds has long been used by the country estate owners to justify the practice. But the first definitive scientific report into the effects that burning heather has on wildlife and climate change shows the damage to the environment is far worse than previously thought. The water run-off from the damaged peat also adversely affects the aquatic life in the rivers that drain the moorlands of Britain. The report was released to coincide with start of the moorland burning season in Britain, when gamekeepers set fire to large areas of old heather in order to encourage new growth next year to feed chicks that will be shot in the autumn. Britain contains 75% of the world’s remaining heather moorland, and its owners say that without the revenue from grouse shooting it would disappear.

The EMBER report (Effects of Moorland Burning on the Ecohydrology of River basins)  is the result of five years work by a team from Leeds University in the north of England, which is a popular area for shooting grouse. Among the significant findings was that burning heather dried out and warmed the peat it grows in, causing the peat to disintegrate and release large quantities of stored carbon dioxide − so adding to the perils of climate change. Professor Joseph Holden, from the School of Geography at the University of Leeds and co-author of the study, said: “Altering the hydrology of peatlands so they become drier is known to cause significant losses of carbon from storage in the soil. “This is of great concern, as peatlands are the largest natural store for carbon on the land surface of the UK and play a crucial role in climate change. They are the ‘Amazon of the UK’.” The EMBER project − funded by the Natural Environment Research Council, with additional support from the Yorkshire Water treatment and supply utility − assessed the impacts of heather burning on moorland consisting mainly of peat on higher land. It compared 120 patches of peat in 10 river catchment areas across the English Pennines, with an equal split between burned and unburned areas. The area studied spanned from near Ladybower Reservoir in Derbyshire to Moor House National Reserve, which straddles the border between Cumbria and County Durham.

The red grouse is a major target during the shooting season Image: Trish Steel via Wikimedia Commons

Among the numerous important findings of the EMBER project, the researchers discovered that the water table depth – the level below which the ground is saturated with water – is significantly deeper in areas where burning has taken place, compared to unburned areas. A deeper water table means that the peat near the surface will dry out and degrade, releasing stored pollutants, such as heavy metals into rivers, and carbon into the atmosphere. Other important findings from EMBER include a decrease in the diversity and population sizes of invertebrates, such as insect larvae, in rivers draining from burned areas, and up to a 20˚C increase in soil temperature in the immediate years after burning, compared to unburned sites. Dr Brown said: “Even small changes in soil temperature can affect the decomposition of organic matter and the uptake of nutrients by plants. But we found increases as high as 20˚C, with maximum temperatures reaching over 50˚C in some cases. “Such changes in thermal regime have not previously been considered in the debate over moorland management with fire, but could explain a lot of the changes we see in terms of soil chemistry and hydrology following burning.” Dr Sheila Palmer, also from the School of Geography at the University of Leeds, and a co-author of the report, concludes: “Our hope is that the EMBER project findings will help all parties involved in assessing the range of benefits and impacts of moorland burning to work together in developing policies for the future management of our uplands.” However, the Moorland Association, which represents the shooting estates, defended the practice of heather burning to promote greater numbers of grouse. In a statement, the Association said: “Heather is kept young and vigorous by controlled burning. If left unburned, it eventually grows long and lank, reducing its nutritional value.

“The burning cycle creates a pattern of different-aged heather. The oldest provides cover for the grouse and other birds; the new shoots, succulent food for birds and sheep. A skilfully burnt moor will have a mosaic of heather and other moor plants of differing ages and the rich variety of wildlife they attract.” The association says that mowing heather is an alternative to burning, but not always possible because of rough terrain. It is also more expensive. André Farrar, planning and strategy manager at the Royal Society for the Protection of Birds, which has long campaigned for the end of burning heather and the destruction of wildlife to promote grouse shooting said: “Managed burning has a profound impact on the life support systems of the peatlands in our hills. “This supports the need to phase out and stop burning on deep peat soils in the uplands. It should also trigger a concerted effort to agree how to bring these special places back into better condition, involving Government, its agencies, and landowners.” – Climate News Network