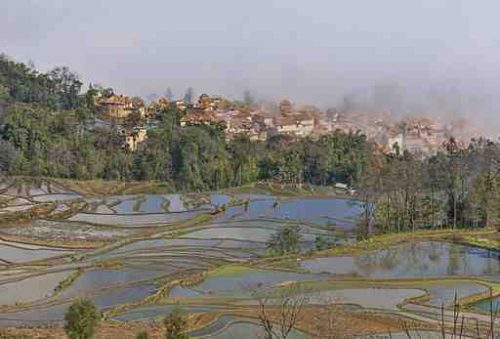 Scientists in the US believe they have identified a way to feed billions more people, while at the same reducing the strains and stresses on the environment. LONDON, 23 July, 2014 − Imagine being able to contain greenhouse gas emissions, make fertilizer use more efficient, keep water waste to a minimum, and put food on the table for the 10 billion people crowded into the planet’s cities, towns and villages by the end of the century. An impossible dream? Not according to Paul West, co-director and lead scientists of the Global Landscapes Initiative at the University of Minnesota’s Institute on the Environment. He and research colleagues report in the journal Science that if government, industry, business and agriculture set about choosing the best crops for local conditions and then used resources in the most efficient way, the world could be fed on existing land with the least damage to the global environment.

This is thinking big: the global view of immediate and local problems. The researchers selected three key areas with the greatest potential for reducing environmental damage while boosting food supply. They thought about water use, food waste, greenhouse gas emissions and polluting run-off from farmland and where fresh thinking could make the most difference in the most efficient way. They focused on cotton and the 16 food crops that produce 86% of the world’s calories from 58% of the global cropland area. They identified a series of what they called “global leverage points”, and those countries where application of such thinking could make the biggest difference. The first challenge is to produce more food on existing land. They see an “agricultural yield gap” − that is, a difference between what soil actually produces and what it could produce− in many parts of the world. And they point out that, in those places where the gaps are widest, simply to close even half those gaps would produce more than 350 million tonnes of additional grain and supply the energy needs of 850 million people − most of them in Africa, plus some in Asia and eastern Europe. Half of these gains could be made in just 5% of the total harvested area of these crops. Co-incidentally, 850 million is very roughly the number of people the UN currently estimates to be severely malnourished. The researchers based all their calculations on existing conditions, while recognising that climate change could force people to think again. But the study identified ways to grow food most efficiently, while at the same limiting the impact on climate.

Agriculture is responsible for somewhere between 30% and 35% of global greenhouse gas emissions, but much of this is because tropical forests are being cleared for farmland. Methane from livestock and from rice fields supplies much of the rest. Brazil and Indonesia, with the planet’s largest reserves of forest, are places where one set of actions could make a big difference. China and India, which produce more than half the world’s rice, are others. China, India and the US between them emit more than half of all oxides of nitrogen from the world’s cropland, and wheat, maize and rice account for 68% of these emissions. Rice and wheat are the crops that create most demand for irrigation, which in turn accounts for 90% of global water consumption. More than 70% of irrigation happens in India, China, Pakistan and the US, and just by concentrating of more efficient use, farmers could deliver the same yield and reduce water demand by 15%. Crops now grown as animal food could supply the energy needs of 4 billion people, and most of this “diet gap” is in the US, China and Western Europe.

In addition, between 30% and 50% of all food is wasted, and the waste of animal food is the worst. To discard a kilogram of boneless beef is the same as throwing away 24 kilos of wheat. Waste reduction in the US, China and India alone could provide food for an additional 400 million people. The paper is not a plan of action, but rather an identification of where the firmest concerted action could make the biggest differences. “By pointing out specifically what we can do and where, it gives funders and policy makers the information they need to target their activities for the greatest good,” Dr West says. “By focusing on areas, crops and practices with the most to be gained, companies, governments, NGOs and others can ensure that their efforts are being targeted in a way that best accomplishes the common and critically important goal of feeding the world while protecting the environment.” – Climate News Network