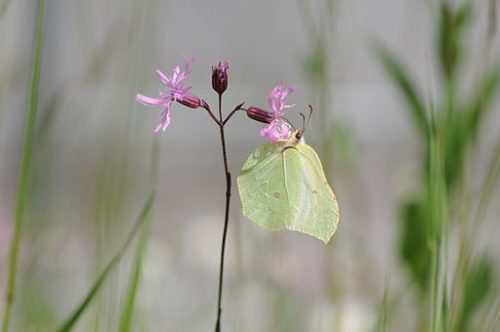 FOR IMMEDIATE RELEASE Research reveals that lighter-coloured insects are thriving as European summers get warmer – but milder winters in the southern hemisphere are restricting the growth of some shrubs and trees LONDON, 31 May − Europe’s butterflies are fading in the sunlight as the summers warm − while some species of shrubs and trees in the southern hemisphere are growing less as winters become milder. Lead author Dirk Zeuss, of Philipps-University Marburg in Germany, and fellow researchers report in Nature Communications that as the climate of Europe begins to warm, the lighter shades of butterfly and dragonfly species begin to outcompete the darker-coloured insects. The researchers, who looked at 366 species of butterfly and 107 kinds of dragonfly, observed a clear pattern of change between 1988 and 2006. In warmer, sunnier southern Europe, the light-coloured varieties are doing well, and the darker kinds have migrated northwards. The southern migrant hawker dragonfly (Aeshna affinis), the scarlet darter (Crocothemis erythraea) have moved to Germany, and in 2010 the dainty damselfly (Coenagrion scitulum) was seen in England for the first time in 50 years.

“For two of the major groups of insects, we have now demonstrated a direct link between climate and insect colour,” said co-author Carsten Rahbek, of Imperial College London and the University of Copenhagen. “We now know that lighter-coloured butterflies and dragonflies are doing better in a warmer world. And we have also demonstrated that the effects of climate change are not something of the future, but that nature and its ecosystems are changing as we speak.” This research is part of a pan-European effort to understand what climate change is going to do to the animals and plants that evolved in regions where the climate once most suited them. Research in Switzerland, for instance, has shown butterflies heading for higher ground. In Britain, some species have responded to temperature rises and moved northwards. Measures of what happens don’t always explain why things happen. A famous evolutionary study linked the changes in colour of the peppered moth to the rise and fall of soot and dust in the atmosphere since the beginning of the Industrial Revolution. But this latest study has nothing to do with air quality, and everything to do with energy supply and temperature regulation in insects.

Dark-coloured insects can absorb more sunlight than pale varieties, and increase their body temperature, so they can cope with cooler climates. In hotter climates, other and lighter-coloured species protect themselves against overheating by reflecting more sunlight. As the temperatures inch up with the decades, the darker coloured creatures must move to cooler places or perish. There are other factors that influence distribution: water supplies and the plants on which insects depend are also changing with average temperatures. But the simple concentration on shade and depth of colour in species clears up a little of the confusion. The ability to absorb and reflect sunlight makes a big difference.

“Until now, we could only watch the massive changes in the insect fauna during the last 20 years,” Zeuss said. “Now we have an idea of what could be a strong cause of the changes.” Paradoxically, warmer winters can have a limiting effect of on some plant species. Melanie Harsch, of the University of Washington in Seattle, US, and colleagues report in PLOS One, the Public Library of Science journal that on Campbell Island, 600 kilometres south of New Zealand, warm spells in winter are actually limiting the growth of trees and shrubs. Researchers have been taking temperature measurements there for more than 70 years, so scientists know that, since then, the climate has on average warmed by 0.6°C. But two long-lived species of evergreen haven’t grown much in average height, and nor have the trees moved up hill − something ecologists might expect with a rise in average warming.

Overall, the climate is cool – winters are never very cold, nor summers very warm − and there isn’t much snow, and the US scientists examined growth records to work out what was happening. The plants won’t grow below 5°C, and winter temperatures hover below that figure. The problem is that the winters are getting warmer – at least for long enough for the trees to wake up from semi-dormancy and start growing again. “When winter temperatures fluctuate between being cold and warm enough for growth, plants deplete their resources trying to photosynthesise, and end the winter with fewer reserves than they initially had,” said Dr Harsch. “In the summer, they have to play catch up.” The other problem of a warmer winter was that seedlings got established, and competed to affect the growth of the older plants. Quite possibly, a new order will be established, in which the island is warm enough for plants can grow all year round. “It’s this transition part that the plants are not adapted for,” Harsch explained. − Climate News Network