No way back for West Antarctic glaciers 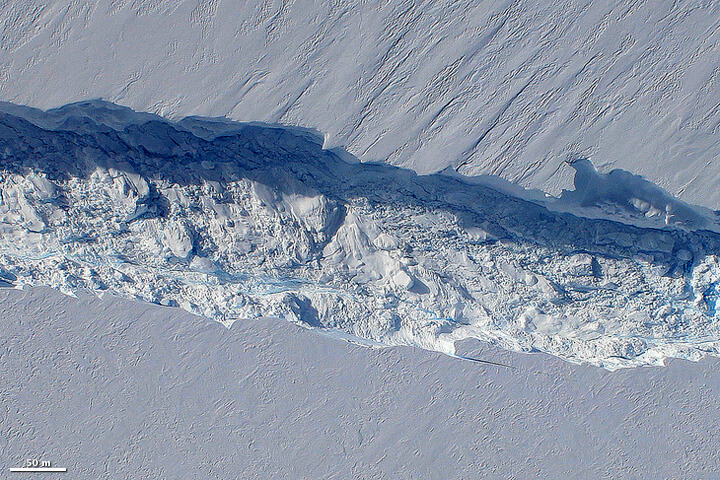 Birth of an iceberg: a massive crack in West Antarctica’s Pine Island glacier

Satellite data analysis reveals the ominous news that the melting glaciers of West Antarctica have passed the ‘point of no return’ as the southern hemisphere gets warmer LONDON, 22 May – The glaciers of the West Antarctic may be in irreversible retreat, according to the evidence of satellite data analysed by scientists at the US space agency Nasa. The study of 19 years of data, due to be reported in the journal Geophysical Research Letters, confirms the ominous news that the southern hemisphere is not just warming − it is that it is warming in a way that speeds up the melting of the West Antarctic glaciers. Long ago, glaciologists began to wonder whether the West Antarctic ice sheet was inherently unstable. The water locked in the ice sheet in the Amundsen Sea region – the area the Nasa researchers examined − is enough to raise global sea levels by more than a metre. If the whole West Antarctic ice sheet turned to water, sea levels would rise by at least five metres.

What the latest research has revealed is a steady change in the glacial grounding line, which is the point in a glacier’s progress towards the sea where its bottom no longer scrapes on rock but starts to float on water. It is in the nature of a glacier to flow towards the sea, and at intervals to calve an iceberg that will then float away and melt. The puzzle for scientists has been to work out whether this process has begun to accelerate. Eric Rignot, a glaciologist at the Nasa Jet Propulsion Laboratory and the University of California, Irvine, thinks it has. He and his research partners believe that European Space Agency satellite data has recorded the points at which the grounding lines can be identified in a series of West Antarctic glaciers monitored between 1992 and 2011, as the glaciers flexed in response to the movement of tides. All the grounding lines had retreated upstream, away from the sea − some by more than 30 kilometres. The grounding lines are all buried under hundreds of metres of ice, and are difficult to identify. The shift of ice in response to tidal ebb and flow provides an important clue. It also signals an acceleration of melting, because it is the glacier’s slowness that keeps the sea levels static. As it inches towards the sea, there is time for more snow and ice to pile up behind it.

But if the water gets under the ice sheet, it reduces friction and accelerates the passage of frozen water downstream. So the whole glacier speeds up, and the grounding line moves yet further upstream. Something similar has been reported from the glaciers of Greenland. And once the process starts, there is no obvious reason why it would stop. The melting will still be slow, but the latest evidence indicates that it seems to be inexorable. “We’ve passed the point of no return,” Prof Rignot says. “At current melt rates, these glaciers will be history within a few hundred years. “The collapse of this sector of West Antarctica appears to be unstoppable. The fact that the retreat is happening simultaneously over a large sector suggests it was triggered by a common cause, such as an increase in the amount of ocean heat beneath the floating sections of the glaciers. At this point, the end of this sector appears to be inevitable.” – Climate News Network