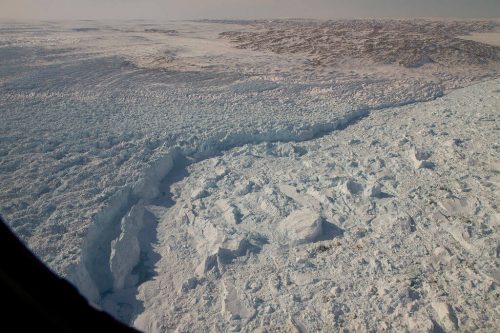 FOR IMMEDIATE RELEASE Greenland is losing ice from part of its territory at an accelerating rate, suggesting that the edges of the entire ice cap may be unstable. LONDON, 13 April – Greenland – the largest terrestrial mass of ice in the northern hemisphere – may be melting a little faster than anyone had guessed. A region of the Greenland ice sheet that had been thought to be stable is undergoing what glaciologists call “dynamic thinning”. That is because the meltwater from the ice sheet is getting into the sea, according to a study in Nature Climate Change. In short, Greenland’s contribution to sea level rise has been under-estimated, and oceanographers may need to think again about their projections. Shfaqat Khan from the Technical University of Denmark and colleagues used more than 30 years of surface elevation measurements of the entire ice sheet to discover that overall loss is accelerating. Previous studies had identified melting of glaciers in the island’s south-east and north-west, but the assumption had been that the ice sheet to the north-east was stable.

It was stable, at least until about 2003. Then higher air temperatures set up the process of so-called dynamic thinning. Ice sheets melt every Arctic summer, under the impact of extended sunshine, but the slush on the glaciers tends to freeze again with the return of the cold and the dark, and since under historic conditions glaciers move at the proverbial glacial pace, the loss of ice is normally very slow. But global warming, triggered by rising levels of greenhouse gases in the atmosphere, has changed all that. Greenland’s southerly glaciers have been in retreat and one of them, Jakobshavn Isbrae, is now flowing four times faster than it did in 1997. Now the Danish-led team has examined changes linked to the 600 kilometre-long Zachariae ice stream in the north-east. This has retreated by about 20 kms in the last decade, whereas Jakobshavn has retreated about 35 kms in 150 years. The Zachariae stream drains around one-sixth of the Greenland ice sheet, and because warmer summers have meant significantly less sea ice in recent years, icebergs have more easily broken off and floated away, which means that the ice stream can move faster. The researchers used satellite studies to measure ice loss. “North-east Greenland is very cold. It used to be considered the last stable part of the Greenland ice sheet,” said one of the team, Michael Bevis of Ohio State University in the US.

“This study shows that ice loss in the north-east is now accelerating. So now it seems that all of the margins of the Greenland ice sheet are unstable.” The scientists used a GPS network to calculate the loss of ice. Glacial ice presses down on the bedrock below it: when the ice melts, the bedrock rises in response to the drop in pressure, and sophisticated satellite measurements can deliver enough information to help scientists put a figure on the loss of ice. They calculate that between April 2003 and April 2012, the region was losing ice at the rate of 10 billion tons a year. “This implies that changes at the margin can affect the mass balance deep in the centre of the ice sheet,” said Dr Khan. Sea levels are creeping up at the rate of 3.2 mm a year. Until now, Greenland had been thought to contribute about half a mm. The real figure may be significantly higher. – Climate News Network