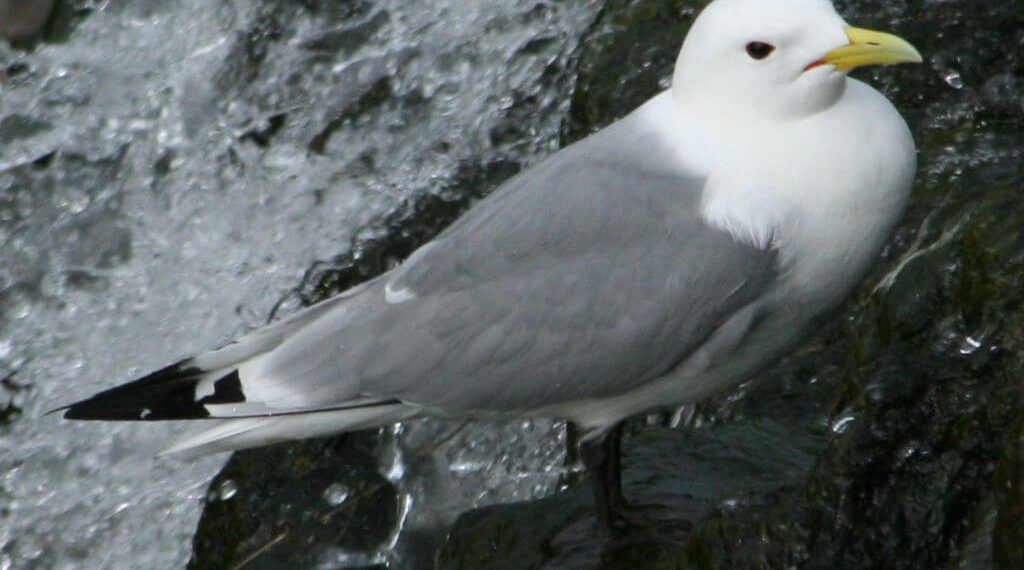 A Scottsh kittiwake: Numbers have plunged since 2000

FOR IMMEDIATE RELEASE Once-familiar Scottish seabirds are among species whose numbers in the UK are falling sharply, scientists say – and the suspicion is that climate change is to blame. LONDON, 28 March – Several familiar British birds are now showing drastic declines in numbers as the reality of climate change strikes home even at these temperate latitudes. Scientists believe climate change is the driving force behind a crash in the numbers of kittiwakes, a seabird species which used to thrive in northern Scotland. The birds are doing so badly that there are fears some colonies could disappear entirely. The Royal Society for the Protection of Birds (RSPB) is the UK’s largest nature conservation charity. In a report to mark the publication on 31 March by the Intergovernmental Panel on Climate Change (IPCC) of its latest findings, the RSPB says that on current trends kittiwakes face extinction from areas that were once core strongholds. It says that since 2000 kittiwake numbers have declined by 87% on Orkney and Shetland, two island groups north of the Scottish mainland. The islands were once home to thriving cliff colonies of thousands of birds, but today, the RSPB says, many cliffs are virtually empty in the breeding season. It says research shows that sea temperature changes are affecting the availability of the birds’ preferred prey, small fish called sandeels.

Paul Walton, head of habitats and species for RSPB Scotland, says: “Ten years ago Marwick Head on Orkney was a thriving seabird city – but now it looks like a ghost town. Evidence points to rising sea surface temperatures driving huge declines and species shifts in plankton populations. This is the food of sandeels, and the sandeels are food for the birds.” Two other seabirds are declining sharply. Razorbills are down 57% from a total of 2,228 in 2000 to just 966 in 2013, and guillemots have fallen by 46% during the same period. The RSPB wants the Scottish Government to designate key seabird feeding sites as marine protected areas. But it says a much bigger challenge is to persuade world leaders to heed the warnings in the IPCC report and do more to tackle climate change. Other UK wildlife and habitats are also threatened by climate change. Machair is a rare, wildlife-rich coastal grassland, mostly found on Scottish islands,  and home to a traditional agricultural system that works in close harmony with nature. Working the machair is a big part of Gaelic culture, supporting corncrakes, ringed plovers, dunlins and great yellow bumblebees. The machair is singled out in the IPCC report as one of the habitats most threatened by climate change. The IPCC says rising sea-levels, and the increased risk of storms and flooding, will mean the land becomes increasingly eroded.

Another British bird of concern to the RSPB is the Dartford warbler, found on the heathlands of southern England and very sensitive to the cold. The species has been steadily moving northwards, apparently because of climate change. It is declining on the southern edge of its range in Spain, and in the UK conservationists are working hard to create new heathland habitat for the birds to move into. Dotterels are birds which breed only on the highest mountain tops of Scotland. Their numbers have fallen from 630 breeding males in 1999 to 423 in 2011. Again, the RSPB believes, climate change is the culprit. Martin Harper, the RSPB’s conservation director, says: “Kittiwakes, dotterels and Dartford warblers are three examples of wildlife being affected on our doorstep, but further afield the picture is stark for a whole range of species. “Climate change will compound the many existing pressures on wildlife including habitat destruction, the introduction of non-native invasive species, over-exploitation and pollution. “The overwhelming scientific consensus suggests that unless we take urgent action to reduce our greenhouse gas emissions, climate change will commit many species to extinction this century. The silent kittiwake colonies on Orkney should be a warning.” – Climate News Network