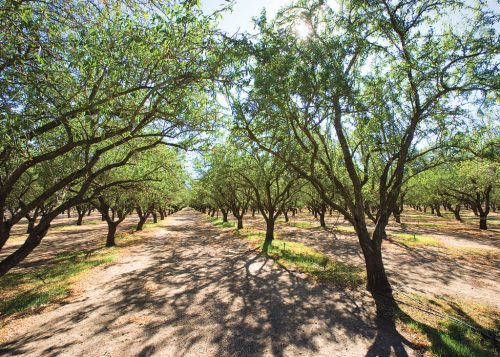 FOR IMMEDIATE RELEASE While recent rainfall has brought welcome relief to California, the amount of precipitation has not been nearly enough to put an end to what is its worst drought on record.  The state’s $45 billion agricultural sector has been particularly hard hit. LONDON, 27 March – Almonds are good for you. That’s the message California’s enterprising nut growers have been giving to the world – and they have been remarkably successful in their marketing efforts. The world appetite for almonds is growing by the day – and nut farmers in the west of the US have been cashing in. According to the Almond Board of California the state now produces more than 80% of total world almond output: California’s almond crop has more than doubled since 2006 to 1.88 billion pounds last year. The trouble is almonds – and other nut crops grown in California – need plenty of water, and right now water is in very short supply. A drought emergency is in force. The snow pack in the Sierra Nevada mountain range – a key source of the state’s water – was recently recorded as being only 24% of its normal capacity for the time of year. At the end of January, California’s State Water Project – the largest state-built water and power development and distribution system in the US, responsible for supplying water to two-thirds of the state’s 38 million people – stopped supplying local agencies in many areas. Scientists are busy analysing whether the drought is linked to changes in climate: President Obama, announcing a drought federal aid package, said the state provided an example of what might be in store for the rest of the country as climate change intensifies.

“We have to be clear”, said Obama.  “A changing climate means that weather-related disasters like droughts, wildfires, storms, floods, are potentially going to be costlier, and they’re going to be harsher.” Under an unprecedented range of restrictions, no water from state projects is being supplied to the agricultural sector. Instead, farmers have to find their own water sources, whether from rivers or by sinking boreholes. Agricultural experts estimate that up to 800,000 acres of farmland will not be planted this year because of lack of water. Cattle ranchers are selling off livestock due to lack of grass. The US now has its smallest cattle herd since the mid-1950s – and beef prices are at an all-time high. But it’s perhaps the nut growers who are suffering most. In recent years California’s farmers have moved away from traditional annual vegetable crops such as tomatoes and lettuce and into the far more profitable market for almonds, pistachios and other nuts. Almonds are now California’s second most valuable crop – only sales of grapes are worth more. The downside is that the nut trees are mainly in regions of central California classified as being under extreme drought conditions. Nut trees demand long-term investment: they need lots of water and take years to produce a crop.

Nut farmers are now scrubbing up portions of their tree plots in order to concentrate water resources on the remainder. They are digging wells and tapping in to already declining aquifers. In the process they are losing millions in revenue. Meanwhile traders say prices for almonds and other nuts are likely to rise sharply on the world market next year due to drought-induced crop shortages. Farmers’ organisations have complained that the agricultural sector has been unfairly targeted with water restrictions, while California’s cities and towns have been only partially affected. That could be changing. In recent days the state supplier to Silicon Valley – the high-tech hub and likely home of the almond milk-flavoured café latte – announced that for the rest of the year it would be supplying only 80% of the normal amount of treated drinking water to inhabitants. – Climate News Network