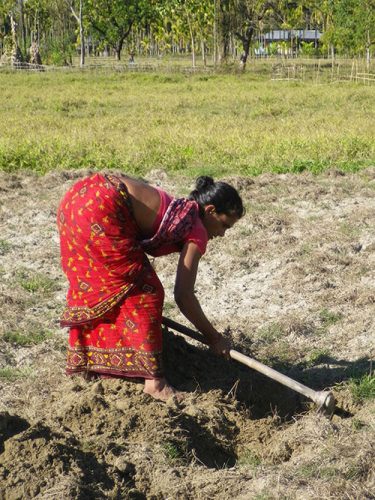 FOR IMMEDIATE RELEASE The Brahmaputra river is one of the world’s mightiest rivers, with millions dependent on its waters. The river also brings misery, with flooding and erosion major problems: climate change is likely to bring more hardship. Kieran Cooke, one of the editors of the Climate News Network, has been in Assam in northeast India, meeting villagers living on the Brahmaputra’s banks. Laupani village, Assam, 10 March – The holes are dug laboriously in the dusty, sandy soil. Krishna Maya Sharma stops her work to wipe the sweat from her lined face. “In the old days we would plant paddy here and have enough to sell at market” says Krishna, a 42 year old mother of six children. “Now the soil is so bad, sweet potato is the only thing that will grow. The rest of our land is ruined.” Laupani is a village in the north of the tea state of Assam, spread along the banks of the Brahmaputra river. In the distance, the pink evening light shines on the snow capped ridges of the eastern Himalayas. The Brahmaputra, its waters rising more than 5,000 metres up on the Tibetan Plateau and flowing for about 3,000 kilometres through China, India and Bangladesh before joining up with the Ganges and out into the Bay of Bengal, is one of the world’s major rivers, 10 kilometres wide in places.

According to a recent report by India’s Third Pole organisation, the Brahmaputra carries a volume of water exceeded only by the Amazon and Congo rivers – and greater than the combined flow of Europe’s 20 largest rivers. The river is a lifeline to millions, delivering vital nutrients to the soils of the plains but its fast flowing waters also cause widespread misery to people like Krishna. Floods are frequent. There is widespread erosion and massive amounts of sand washed out of the river’s banks are deposited on surrounding fields, making once verdant areas into what looks like an enormous beach. The floods also bring invasive plant species that colonise agricultural lands. More than 40% of Assam’s geographical area is designated as being flood prone: more than 1.5 million people were displaced by floods in 2012, lives were lost and whole villages were washed away.

“The waters were so deep and stayed so long that the grass was destroyed and our cattle died because they had no fodder” says Krishna. “The sand means our land is no good anymore – my husband has given up being a farmer and is working in construction. Many young men go away to try and find jobs, there is nothing for them here.” Locals – the majority of whom are poor, subsistence farmers – say river flows are becoming more unpredictable, with erosion and what’s called sandcasting becoming worse. In part the flooding caused by the Brahmaputra’s waters is a natural phenomenon which has been going on for centuries. As the river’s waters cascade down from the Tibetan Plateau and Himalayas, millions of tons of sediment is washed onto the alluvial plains of Assam and others states in India’s northeast.

There are other forces at work: the region is a highly seismic zone. In 1950 the Brahmaputra river basin suffered one of the most violent earthquakes ever recorded. The geology of the area was changed and the river level was raised dramatically, by between eight and 10 metres in places. Climate change is another factor, with a combination of rising temperatures and accumulations of what’s known as black carbon or soot in the high Himalayas and on the Tibetan Plateau causing glaciers which feed into upper reaches of the Brahmaputra to melt. Increasingly unpredictable rainfall patterns, with periods of intense downpours, are also contributing to more volatile river flows. Professor Jogendra Nath Sarma is a locally based geologist who has been studying the Brahmaputra for years. “Over time different rivers in the Brahmaputra basin have merged, braiding over a very wide area. Thousands of square kilometres of land has been eaten away. Rampant deforestation is another big contributor to land erosion. “ In the past, says Professor Sarma, people would migrate to higher ground during the flood season but now, due to population growth and large scale immigration, there is nowhere for them to go.

The future does not look good. According to models produced by scientists at the Indian Institute of Technology in Guwahati, Assam’s capital, climate change will result in the Brahmaputra valley region experiencing more flood events. The Institute says that not only will river peak flows increase: so will the incidence of pre-monsoon flooding, endangering key phases of the agricultural cycle. Talk of climate change is not of great interest to Krishna, digging holes for her sweet potato plants. She has more immediate things to worry about. “Life is getting harder. Every time the floods come, I wonder what will happen. But where else can we go?” – Climate News Network